Abbie Miller composes lines that can dazzle the senses or touch the soul: 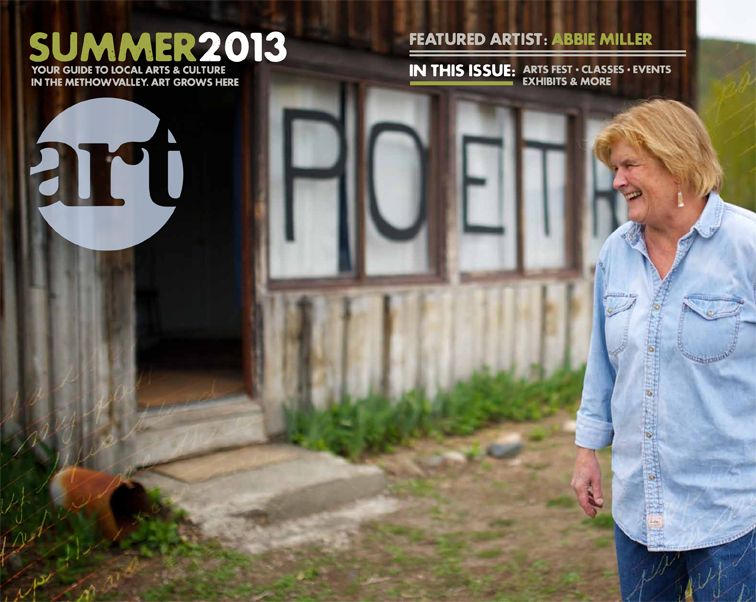 They ate rock salt on sour dock
morning, noon and night
For days

My last best lover
was the wind

Yet she sometimes wonders if what she writes is poetry.

“I love breaking the line—it makes you see things differently. But maybe I’m not a poet and I just break up my writing in lines and have a certain lyric style,” she said.

Miller’s resistance to categorization comes in part from her flexible view of art—and a fundamental humility. As she sees it, writers, visual artists, and musicians are all working from the same creative place, facing similar challenges as they try to develop their unique voice as artists. “Biting into whatever it is you want to express—however you want to express it—is worthy,” she said.

Miller has always straddled the traditional boundaries between disciplines. Decades ago she wrote music and performance pieces with her sister Jo, a singer/songwriter, and today she is making art books, folding and stitching sheets of paper into tiny volumes, each a self-contained poem. “Maybe turning my poems into books will make me find out I’m a sculptor,” she said. 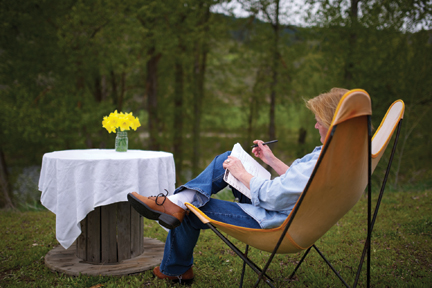 Transferring her words into print on the page presents its own challenges, because Miller, who comes from a family of cowboy poets and auctioneers, normally speaks her poems. “Reciting is one of the requirements of the genre,” she said. “So I went by the rules, figuring I had to have my boots on,” she said. She introduced her writing to the world by reading it out loud.

Reciting felt natural, since Miller wrote long-hand and edited by reading her poems aloud until they rang true. So she knew them from memory, understood how the words sounded and where the pauses and inflections should fall. “My poetry is very conversational,” she said. “It tumbles over the page like water.”

Although today Miller often writes on a computer, she still relies on speaking her poems and on listening to others read them. “Putting poetry in other people’s mouths is part of what’s important,” she said. “Even if you’re alone in the room, poetry must be spoken out loud to understand the subtle rhythms and sounds. You don’t get that when you read with your eyes.”

Coming from the oral tradition has made creating art books and rendering her words in a graphic form intriguing to Miller. “I can say a poem,” she said, “but when it comes to the page, there are all these other opportunities to see what you’re doing.”

Before shifting her focus to writing, Miller worked for years as a hairdresser, which played a significant role in her development as a writer. Exchanging stories with her clients helped her understand human concerns and experiences. “I’m curious about people and very interested in them—it was not gossip,” she said.

Working long hours cutting hair while she was a single mother, Miller spent every spare moment writing, filling notebooks before the kids woke up and after they went to bed. “A lot of my writing came from conversations with myself,” she said. 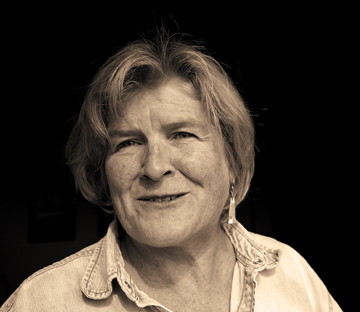 Her kids understood and indulged her passion. They would entice her to take them swimming in Boulder Creek or snowboarding at Washington Pass by pointing out, “Mom, when we get there, you could write….”

During those early writing years Miller felt some self-consciousness about the formal rules of language and the strictures imposed by punctuation. But once she found free-form writing and blank verse in college and began receiving encouragement for her writing, everything changed. “I liked to hear my voice on the page,” said Miller. “But it was hard to conceive that I might have in me what it is to write.”

Influenced throughout her life by the Methow and the generations of women in her family who made their living—often with great difficulty—from the land, Miller had a deep well of subjects she wanted to explore. “This place gives me comfort because I remember it as deep and soulful,” she said.e self-consciousness about the formal rules of language and the strictures imposed by punctuation. But once she found free-form writing and blank verse in college and began receiving encouragement for her writing, everything changed. “I liked to hear my voice on the page,” said Miller. “But it was hard to conceive that I might have in me what it is to write.”

Her identification with the land and its connection to women’s lives is visceral. Her poem “If the Land Were a Woman Lying Down” begins:

“A lot of my work goes back to wanting to tell the female story—I feel it’s not given very much airspace,” said Miller. She is frank about women’s experiences—their personal life, their sex life, and what it’s like to confront social norms and carve out a persona in a small town.

So Miller travels the countryside, visiting her family’s homesteads and reliving her own relationship to the landscape. On these trips, poems sometimes come to her fully formed, so that she has to pull over to the side of the road to write one down.

Another time she recalls writing 41 pages almost all at once. “I became increasingly obsessed with this character—it was the first time a character came alive,” said Miller.

Other poems take years to coalesce. “My Heart Beats a Path” grew out of multiple journals and memories that seeped as if from her DNA, roving conceptually and geographically before Miller narrowed it again to focus on the Methow.

Miller is comfortable allowing her work to marinate, often letting a poem sit for at least a year until she knows what needs to be cut. “In the beginning, everything was sacred,” she said. “But if it sounds too good, it’s probably too clichéd—you have to be willing to cut the pretty bow.”

Miller believes her writing is influenced by the uncommon associations her brain makes—linking letters and numbers with colors or smells and sounds. “It makes for great poetry,” she said.

“I write all the time—without my paper I’d just be beating my head against the wall,” said Miller. “I’m open to writing at any moment—where I can write anything I want, about anything.” 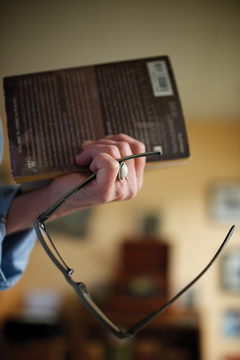 Today Miller is involved in several projects to further the experience of writers in the Methow. She has opened a studio across from the Carlton Store, where she writes and creates art books and holds readings for writers to share their work with the public—and for the public to hear poetry and short fiction. She also envisions groups where writers can trade ideas, critique one another’s work, and provide encouragement. “I’m looking for ways for people to make art and have it be supported and inclusive,” she said.

Miller has also joined two other local writers, Patrick McGann and Georgina Tobiska, to launch the Methow Asylum for Writers. The group plans gatherings and workshops for writers and readers and its own literary journal.

“I’m trying to be consistently inspired by something,” said Miller. “I have 30 years of work with form and intention—it’s so much material to work with. Planting the seed is part of it—getting people to want to read you and hear you.”

“I’ve just wanted to have a presence as an artist on the planet,” she said.

(All photos by E.A. Weymuller)