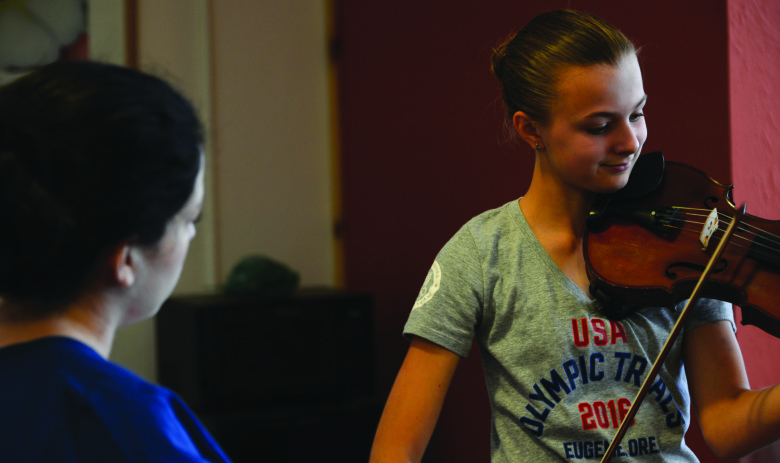 Cascadia Music presented the Pipestone Summer Music Camp from August 1-5, 2016 in the Methow Valley Community Center. The building was literally filled with music all week. The camp focused on chamber music, but there was also an orchestral component. Ensembles included a Haydn string quartet, a piano quintet by Camille Saint-Saens, a guitar trio by Handel, and a piano four hands duo called The Emerald Sonata. Larger works included a piece for string orchestra from the movie Madagascar by Hans Zimmer. The camp is open to both students and adults. This year several generations of musicians were represented as well as pupils from Seattle.

The Methow Valley Chamber Music Festival supported the camp in two important ways, first by offering free admission to Pipestone students and faculty to the Tuesday night concert, and second by making possible a visit to the camp by the Festival’s Fellowship Quartet. The quartet performed an entire Haydn String Quartet and then sat in on an orchestra rehearsal performing alongside appreciative and inspired students.

Other activities at the camp included a class in music composition techniques which featured an original piece called Twinkle Twinkle, Brother John by Terry Hunt, activities such as dodge ball and hacky sack, and reports written by the students which were presented towards the end of the camp. An essay on the life of eccentric French composer Erik Satie was of particular interest. A final performance was held in the Community Center gym which recently underwent extensive sound treatment thanks to a generous grant from the Mocassin Lake Foundation. Many audience members and performers commented on the remarkably improved acoustics.

The Pipestone Summer Music Camp is designed to coincide with the Methow Valley Chamber Music Festival in order to provide an immersive experience to the fortunate campers. For information about next year’s camp see cascadiamusic.org or call 509-997-0222.