Come out to the big tent on the riverbank for “Blues for the Burn 2015,”  as national recording artist Too Slim and the Taildraggers play a benefit concert for the Carlton Complex Long Term Recovery Group on Saturday, September 12, at The Virginian Resort in Winthrop. Aaron Studen’s crew from Methow Brewery and the Twisp River Pub will be pouring beer and grilling grub. Musician songwriter Terry Lee Hardesty, who has performed with Merle Haggard and Johnny Paycheck, will open both sets. The gates open at 6:00 p.m.; the music starts at 7:00 and lasts until 11:00. 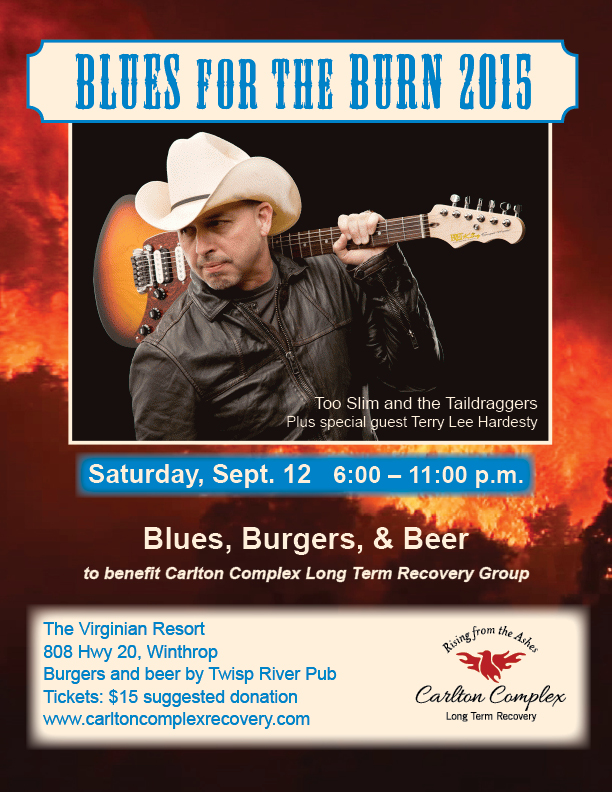 “Too Slim is one of the Methow’s favorite artists and we’re delighted to present him on behalf of Carlton Complex recovery,” says Jimmy Smith, manager of The Virginian Resort and co-founder of the Winthrop Blues Festival.
“Too Slim,” otherwise known as Tim Langford, is respected among blues aficionados as a master of the slide guitar, “a spectacular songwriter,” and “a supremely talented performer and composer who ranks with the best that blues/rock has to offer,” according to blues critic Graham Clarke. A frequent headliner at the Winthrop Rhythm and Blues Festival, Too Slim and his band are famous for getting the sunburnt crowds up on their feet and dancing. With 18 albums to his credit, Too Slim can be counted upon to deliver a high-energy performance.

Tickets are by donation: $15 is suggested; food and beverages are extra. The event will proceed “rain or shine” under the big tent on the river.

The Carlton Complex Long Term Recovery Group is the grassroots organization working to provide coordination and recovery services to those individuals, families, businesses and communities that were adversely impacted by the 2014 wildfires and mudslides across Okanogan County.  To learn more, or to contribute, visit www.CarltonComplexRecovery.com. All donations are fully tax-deductible to the extent allowed by law through the fiscal sponsorship of the Community Foundation of North Central Washington.

BACKGROUND: In July 2014, the largest wildfire in Washington’s history roared through Okanogan County in the north central part of the state, consuming hundreds of homes, barns, and outbuildings in a place where agriculture is the backbone of the economy, supported by tourism and recreation. The wildfires also destroyed forests,
habitat, hundreds of miles of fencing, and hundreds of head of livestock. In all, over 400 square miles – an area four times the size of Seattle – burned for weeks, blackening a region that produces apples, cherries, timber, beef, wines, and other goods that all of Washington—and the world—enjoys.

Of the hundreds of homes that burned, almost half were uninsured—a common occurrence in remote rural locations, where insurance is often unavailable, or prohibitively expensive. Many homes were beyond fire district boundaries; still others were uninsurable because they were built before modern building codes.

In addition to losing their homes, many survivors also lost tools, farm equipment, orchards, pastures, vehicles, and personal possessions. In a matter of hours, lifetimes of work were reduced to rubble. Following the fire, a heavy rain created massive mudslides that demolished still more homes and cut off access to small businesses along the
highway. The mudslides also destroyed roads, irrigation systems, electric infrastructure, and other property.

Nevertheless, and despite a lack of individual aid from FEMA, the people of Okanogan County—assisted by a remarkable network of faith-based and other community-minded NGOs—are rebuilding their communities, while simultaneously working to be better prepared for future disasters.

Led by a grassroots organization, the Carlton Complex Long Term Recovery Group (CCLTRG), operating under the fiscal sponsorship of the Community Foundation of North Central Washington, the communities created a county-wide network of Disaster Case Managers to assess individual needs and help survivors create individual plans for recovery. An Unmet Needs Committee began meeting weekly to review and approve requests for financial and other types of assistance, funneling donations to those without other means of replacing everything from dentures and hearing aids to home furnishings and tools. When spring arrived, so did crews of volunteers from churches, colleges, and AmeriCorps National Civilian Community Corps to help cut and clear burned trees, remove “ash and trash,” replace burned fencing, and plant hundreds of trees. In May, work got under way to rebuild the first 11 homes in the long-term recovery effort.