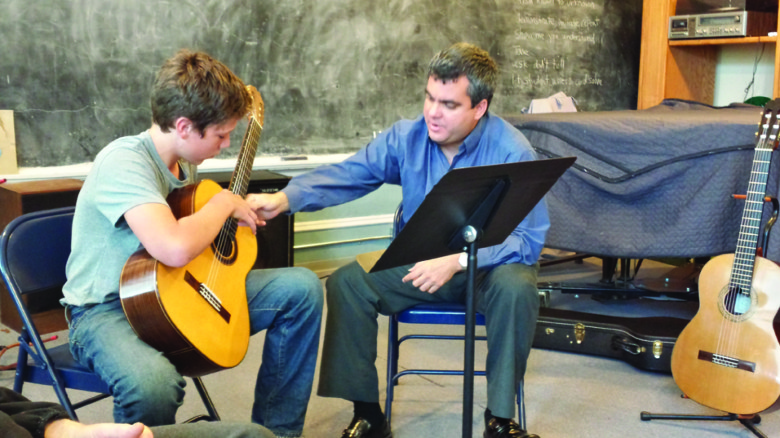 Join Cascadia for a weekend of guitar. Presenting three events in Twisp, Cascadia brings renowned guitarist Edel Muñoz back and adds in local flavor with Terry Hunt and Rico Stover.

A Cuban native and United States resident, Edel Muñoz is one of the most acclaimed and sought-after players in the classical guitar scene. He is the first prize winner in more than 20 international guitar competitions including the Miguel Llobet International Competition in Barcelona, the Montreal and the Havana International Guitar Competitions. As a concert artist, Edel has performed in major theaters and recital halls throughout the world including Carnegie Hall in New York, the Palau de la Musica Catalana in Barcelona, and in more than 25 countries around the world including Canada, Argentina, Russia, Mexico, Chile, Belgium, Italy, Germany, Venezuela, Czech Republic, Uruguay, France.
Edel performs a solo concert at the Merc Playhouse on Saturday, November 7 at 7:30pm. He will also visit regional schools and give a master class. and many others.

On Friday, Nov 6 at 7:30pm, also at the Merc Playhouse, guitarists Rico Stover and Terry Hunt present an evening of guitar. A highlight of the event will be a multi-media lecture/ demonstration on Latin American Guitar Music by Rico Stover.
For the final event of the weekend, Sunday, November 8, Rico Stover presents Cabaret Guitar, An Evening of Popular Songs at the Twisp River Suites.

Rico Stover
Rico Stover resides in Washington State and the country of Paraguay, composing, writing, publishing and performing. He has appeared in guitar festivals in the USA, Canada, England, Italy, Mexico, Paraguay, Puerto Rico, Venezuela, Honduras, El Salvador and Costa Rica. The Guitar Foundation of America has honored Rico Stover presenting him with the Lifetime Artistic Achievement Award at the GFA convention in Louisville, Kentucky in 2013.

Terry Hunt has lived in the Methow Valley for over 22 years. He received his MA from the Lamont School of Music where he was teaching assistant to Ricardo Iznaola. Terry is active in a wide spectrum of creative activities and has won awards for his musical compositions and filmmaking.