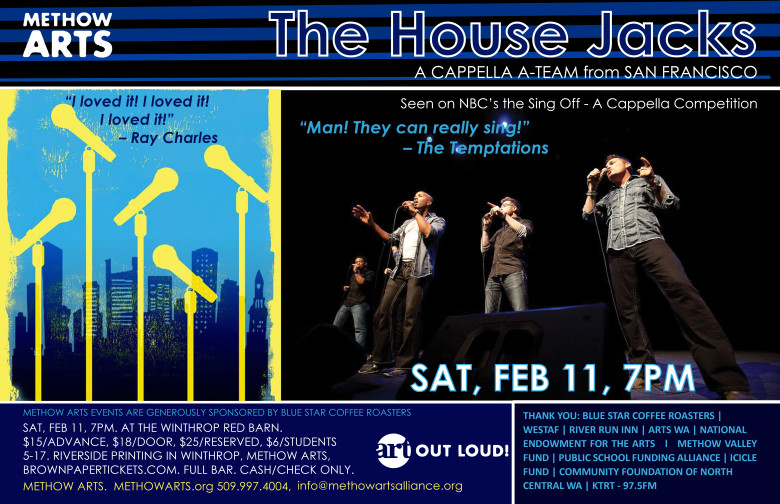 The human voice is a terrible thing to waste – and the House Jacks make superb use of theirs. The New York Times praised their “astonishingly precise vocal drumming.” The Oakland Tribune praised their “amazing voices, impressive arrangements, and dynamic stage presence.” A rock band without instruments, these five amazing musicians perform in an a cappella style that obliterates all preconceptions about what a voice can do. Hard-driving drumbeats, mind-bending guitar riffs, exquisite harmonies – the House Jacks do it all, from tender ballads to churning funk, from pop classics to soulful originals. They know how to make beautiful music, and they know how to entertain.

The band started on the college a cappella circuit in the late 1980s and went on to tour much of the world. They’ve played Carnegie Hall and the House of Blues, and been featured on NBC’s The Sing-Off and ESPN’s Monday Night Football. Their albums and songs have won six Contemporary A Cappella Recording Awards, including best album for Unbroken and Level, and best original song for “This Man’s Pride” and “Red Dress.” The band includes co-founder and San Francisco native Austin Willacy, Nick Gerard, John Pointer, Elliot Robinson, and their newest member, Troy Horne. A house jack is a piece of heavy equipment used to lift a house, and these guys are a great bet to lift the Winthrop Barn on Saturday, February 11th.

Founded in 1991 by Deke Sharon, widely recognized as The Father of Contemporary A Cappella, The House Jacks of San Francisco are the original “rock band without instruments”.  Using nothing more than their five voices (and mouths, and sometimes bodies), they deliver everything from blistering funk to screaming rock to heart-

melting ballads for anyone who loves music.  Over the past 25 years, the group has become an institution, claiming nearly 20 superb vocalists and performers in their alumni ranks, including Garth Kravits (originated his role as one of the Tall Brothers in the Drowsy Chaperone in 2006), Troy Horne (fronted the rock band Moses, played Tom Collins in RENT on Broadway), Kid Beyond (first virtuoso beatboxer to be featured in an a cappella group), John Pointer (Chili’s Baby Back Ribs beatboxer, Judas in Jesus Christ Superstar, created the Big Beat A Cappella style with his group Schrödinger’s Cat), Nick Girard (producer/coach for the Sing-Off!), vocal superstars Austin Willacy, Roopak Abuja, Jake Moulton, and many others.

These pioneering musicians have performed thousands of shows and have shared the stage with some of the biggest names in music.  They were instrumental behind the scenes on NBC’s The Sing Off!, creating arrangements, coaching groups, producing the cast albums, and helping to introduce some of today’s most well-known vocal groups to the world stage, including Pentatonix and Home Free.  And now they are also teaching heavily, unpacking the hows, whats, whys, and whens of vocal music, in ways that anyone can easily understand.

A “house jack” is what you use when you want to move, level, or lift a house.  Anyone who’s seen them perform live will tell you that the name is appropriate. Phrases like “Rock the Rafters,” and, “Raise the roof” take on new meanings with the House Jacks.  The whole building shakes, and the entire audience is lifted together.

The House Jacks have performed in Stadiums (from Fenway to Candlestick), Theaters/Clubs (from Carnegie Hall to the House of Blues), Colleges (from Dartmouth to Stanford), Festivals (from The World Expo to the Black and White Ball) in locations around the US and internationally, including France, Italy, Belgium, the Netherlands, Germany, Austria, Japan, China, Hong Kong, Taiwan, and Singapore…  …where they have appeared with Ray Charles, James Brown, Train, LL Cool J, the Neville Brothers, Bill Clinton, Crosby Stills and Nash, the Pointer Sisters, Live, Nia Peeples, Johnny Clegg, 5 Blind Boys of Alabama, Colin Powell, the Temptations, George Carlin, Pam Tillis, The Four Tops, The Gap Band, Tower of Power, Starship, Jon Secada, Run-DMC, and many others.