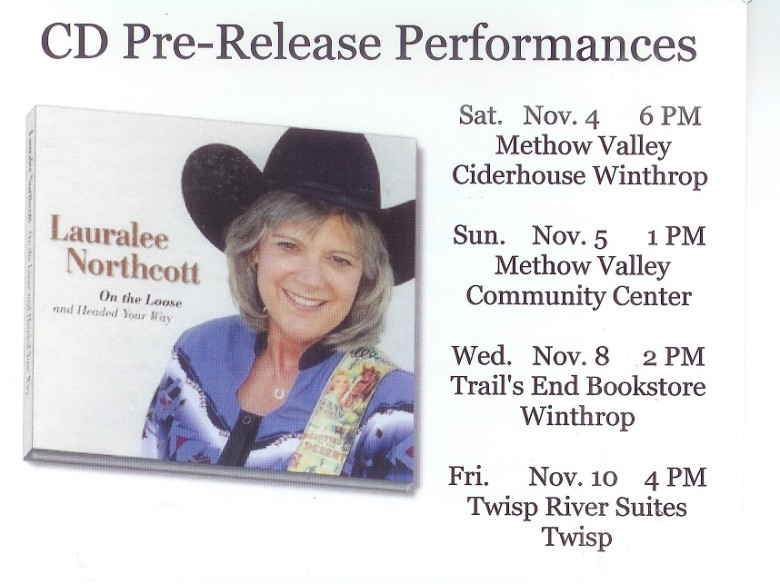 will be performing selected songs and poems from her all original album. Audience members

will go on a mini-pack trip to the Pasayten Wilderness and hear about some of the adventures that
spawned the work. This performance is suitable for all audiences and will be a lot of fun. All
performances are about 1 hour, with autographed CDs available for purchase. No admission charge.
This album will not be officially released until January 2018, but this is a sneak preview for Methow
ears only!

This album is a collection of original compositions, like a tasty campfire
stew, with traditional western flavors, a cup of mountain poetry and a dash of
finger-picking heart strings. Lauralee was a wilderness guide and cook for over
30 years. These are songs about those experiences, and more. There are
poems that will truly put you smack in the middle of the trail, and there are some
songs that are both reflective and pensive. From beginning to end this is a
group of exceptional worth.

Lauralee was the principle songwriter and bass player (1999-2017) for
Horse Crazy Cowgirl Band, Western Music Association&#39;s “Group of the Year” in
2015 and winner of multiple harmony awards. Here we have the treat of hearing
“other songs”, the ones that reflect her time in the wilderness. These are songs
and poems that have waiting to be heard. Soon there will be a book, enhancingthese songs and poems with stories and of course some amazing mountain menus.In the mean time, enjoy these tasty tunes and feel the heart that has gone into them.

For more information contact Lauralee at: www.lauraleenorthcott.com.
There you will find pictures, schedule, background information, and lots more.
Please leave a note and say howdy.