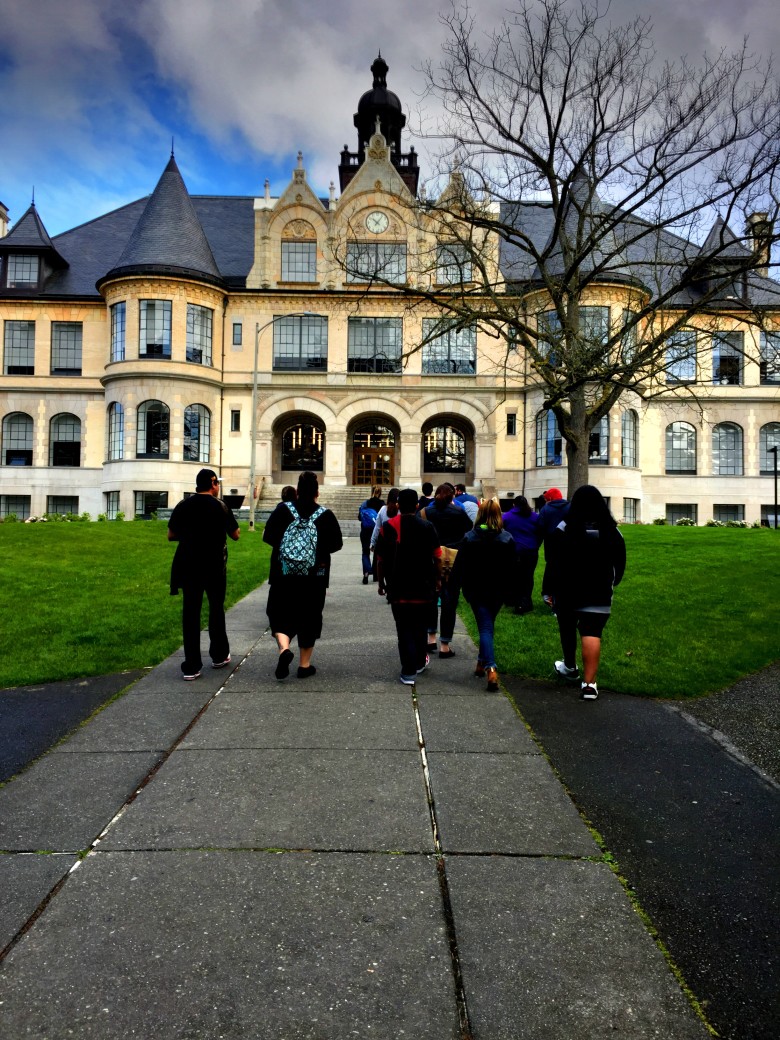 What began as an isolated experience 4 years ago has grown to be an eagerly-anticipated component of Paschal Sherman Indian School 8th and 9th graders’ final years: the annual urban culture trip to Seattle.

In its first three years the trip included seeing a musical at one of the great theaters downtown, a night in a Bellevue hotel, and visits to places such as the Seattle Aquarium and MoPOP (the Museum of Pop Culture, formerly the EMP Museum).

This year, however, thanks to a dedicated professor at the University of Washington (UW) and financial support from other faculty and the NASA grants program, an additional night in Seattle plus a day spent on the UW campus were added to the itinerary. 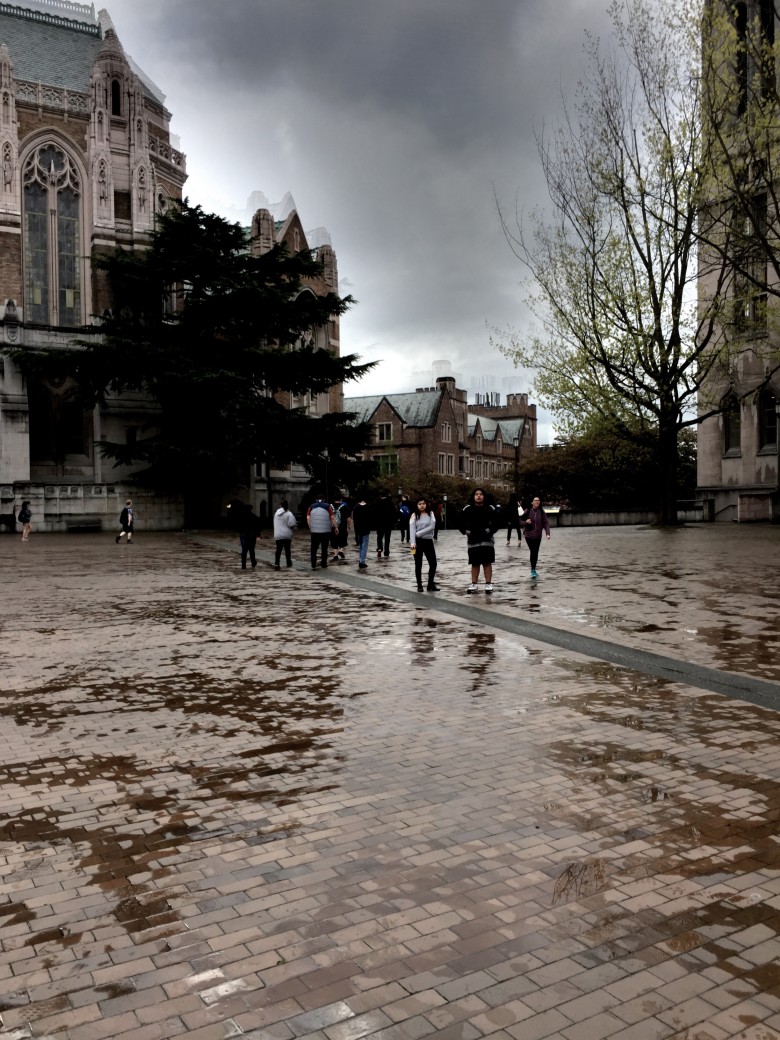 A 6-hour drive brought the students from the Colville Reservation over the mountains to Puget Sound, where they checked into the bright and modern University Inn in Seattle’s University District. After walking up to campus, the students were greeted by two UW undergraduates, who gave them a brief tour of campus and then sat down to share pizza with them.

After dinner, the students dressed up to see “The Secret Garden” musical at the 5th Avenue Theatre. From their seating in the Grand Tier on the mezzanine level, the students had a clear view of the stage, and spent two hours transfixed by the haunting tale of loss and love…and also by the impressive movement of intricate sets and magical lighting. At intermission, one student turned to a chaperone and told her, “I’ll never forget this for the rest of my life.”

The next morning the group trekked back to UW, passing Thai, Japanese, Korean, Indian, Italian, Greek, and Ethiopian restaurants on a walk that was quickly becoming familiar. And then began an agenda so full of interesting activities that at the end of the day the students were nearly glaze-eyed, as they processed the many new things they had seen, heard, and done, as well as the opportunities presented to them. 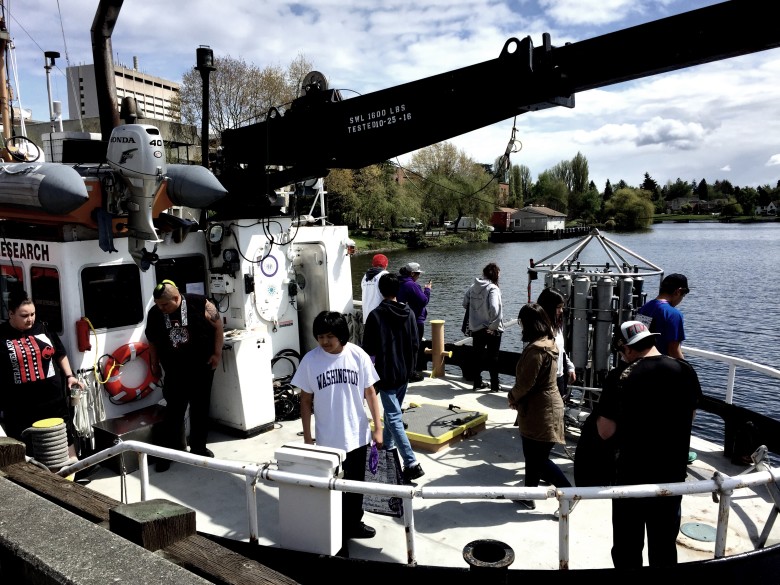 The day on the UW campus was the brainchild of UW Classics professor Sarah Culpepper Stroup, who met Paschal Sherman Indian School science teacher Barb Quintasketat at a UW Earth and Space Sciences / NASA outreach event, led by Professor Robert Winglee,  in Nespelem in the fall of 2016. As Quintasket told Stroup about the annual Seattle trip, Stroup’s mind started turning with possibilities. By drawing on her professional and personal connections throughout the university community, Stroup was able to schedule (and fund!) two nights of lodging and a day at UW that allowed students to visit:

If that’s not a full day, we’re not sure what is! 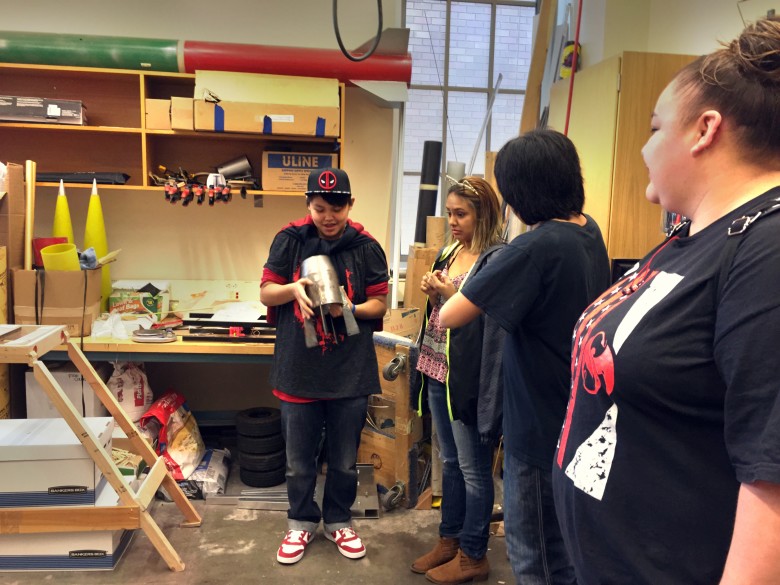 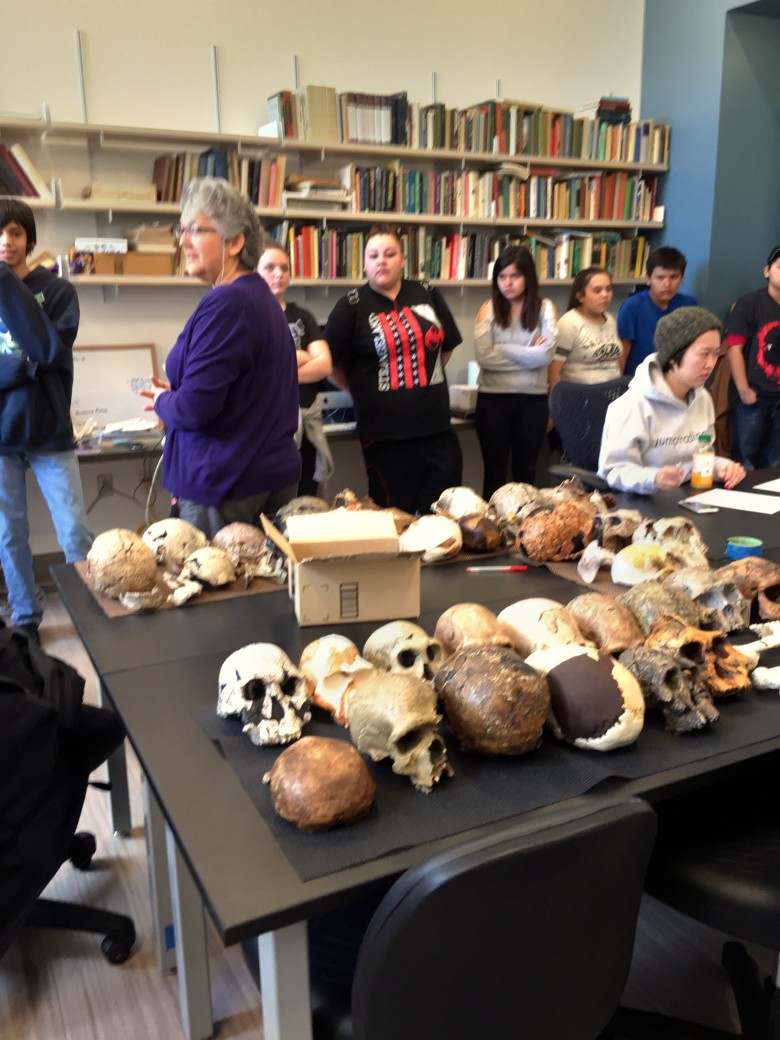 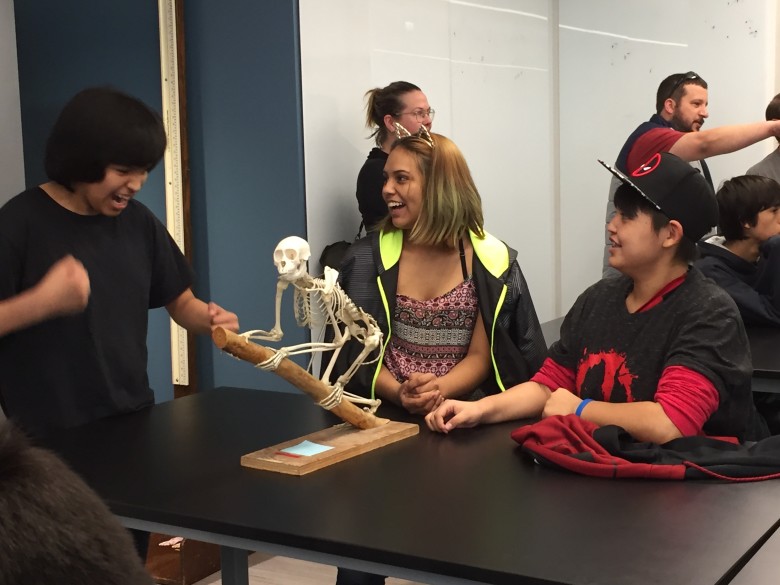 Gracious students and hospitable faculty and staff greeted the students at every leg of the journey, presented them with fascinating lectures and engaging Q&A sessions, and urged them to find their academic interests and follow their passions. Earth and Space Sciences students Angela Kimber, Paige Northway, Tyler Valentine, and Keon Vereen let students handle pieces of rockets, described their own successes and failures with various rocket tests, and generally shared their enthusiasm for their academic and practical pursuits. Kimber, Valentine, and Vereen joined the students for later components of their UW day and answered questions about what factors influenced their personal decisions to study at UW. Similarly, anthropology graduate student Steven Lautzenheiser talked about his own research, engaging the students with his wryly humble sense of humor.

At  wǝɫǝbʔaltxʷ, the message was even more poignant, delivered by Ross Braine, UW tribal liaison and director of Intellectual House. A member of the Crow/Apsaalooke  Nation from Montana, Braine grew up on the reservation and understands the challenges facing Native students. “We’re here to support you,” he said. “We’re here so that you know that as a Native, you’re not alone.”

Braine minced no words when telling the students about how overwhelming university life can be for someone coming from the reservation, but he also counseled them to “work hard, get your grades up, and go to college.” There are opportunities out there, he said, for those who are willing to pursue them. “Look at me,” he said. “I came from a broken home. We didn’t have much money. But I had a dream to attend the UW, and I graduated, and now I work here.” He added, “And with my team I raised $5 million to pay for this building,” waving his arm at the gleaming longhouse-style building we stood in. (Read more about that story here.) 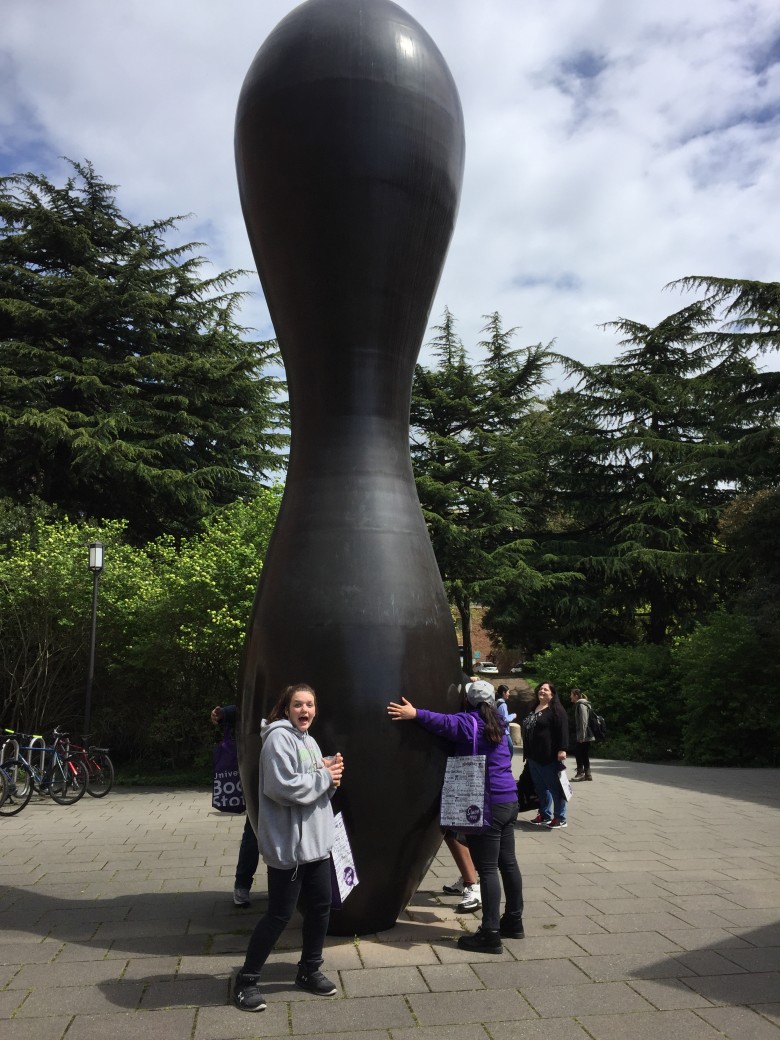 Stroup addresses her reasons for including the American Indian Studies department on the tour, acknowledging that it’s not really effective to “bring the kids out and have them meet a lot of highly educated, fairly privileged people who share almost nothing with their lived experiences who tell them cheerily, ‘You can do this!’ and then move on.” She continues, “I really do think that it’s important for [the students] to hear from people with whom they share experiences. It is almost impossible to feel like you can achieve something if you can’t imagine yourself there, and it’s hard to imagine yourself there if you can’t see anyone like you there.” That’s why the time at wǝɫǝbʔaltxʷ  was the perfect cap to the day at UW. Not only did Braine’s childhood mesh with the upbringing of many of the Paschal Sherman Indian School students, but he has also made numerous trips to their reservation to meet with their tribal chairman. Braine literally knows where the students are coming from and can empathize with the challenges they’ll face in their future. 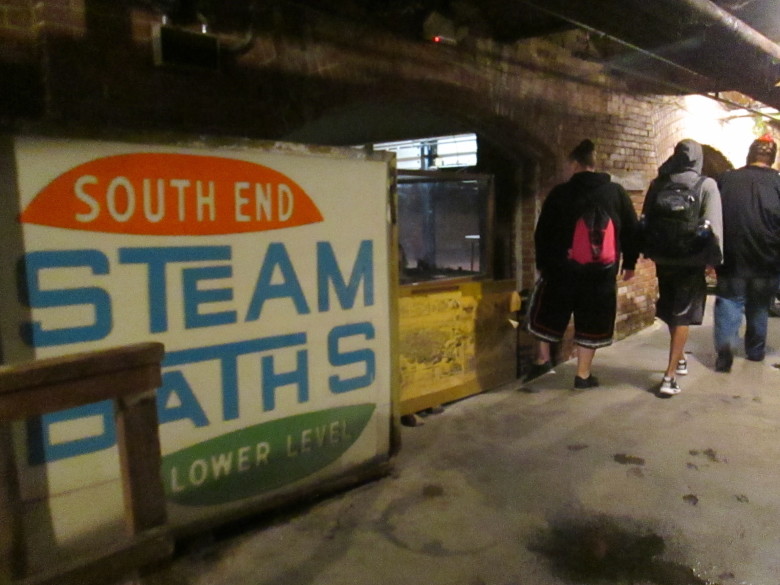 The following day students hopped on the bus bright and early, refreshed after a good night’s sleep, and headed down to Pioneer Square to participate in Bill Speidel’s Seattle Underground Tour, which takes visitors on a walking tour of the buried city. When Seattle was forced to rebuild after the great fire of 1889, city planners decided to raise the city one level to avoid some of the hassles that had come with constructing the city on tideflats. What resulted is an entombed area of subterranean sidewalks and storefronts, and skylights on roadways, many of which are accessible through a series of tunnels preserved by Seattle publicist Bill Speidel. 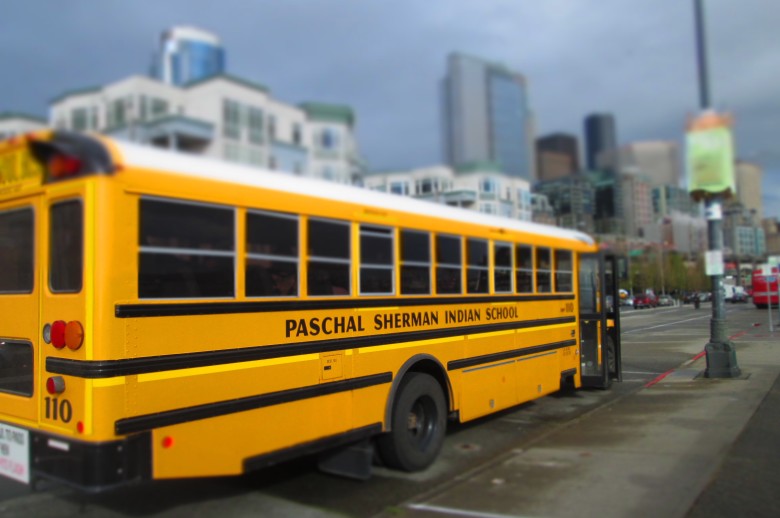 For many students, the trip was the first time they had seen a professionally-produced play; some had never been to Seattle. Few had spent any time on a university campus, particularly one as large, grand, and culturally diverse as that of the UW. One of the ninth graders participated in last year’s field trip as an eighth grader, but he was still delighted to discover that all the elements of this year’s trip were different: a different play, different tours, different sites. He learned that there are many ways to experience Seattle.

The drive home over a snowy Steven’s Pass seemed to fly by, as students looked through their photos and already began reliving memories of a busy and rewarding urban field trip. They’ll share their experiences with the younger students at the school, who will anticipate their own opportunities to visit Seattle–and places beyond–when they are older.

This field trip is a Methow Arts Alliance project, sponsored by a private donor from the Methow Valley, The Icicle Fund, National Endowment for the Arts, ArtsWA, the University of Washington, and the Washington NASA Space Grant Consortium. Thank you–or as we say in Salish, límlímtx! to our sponsors.