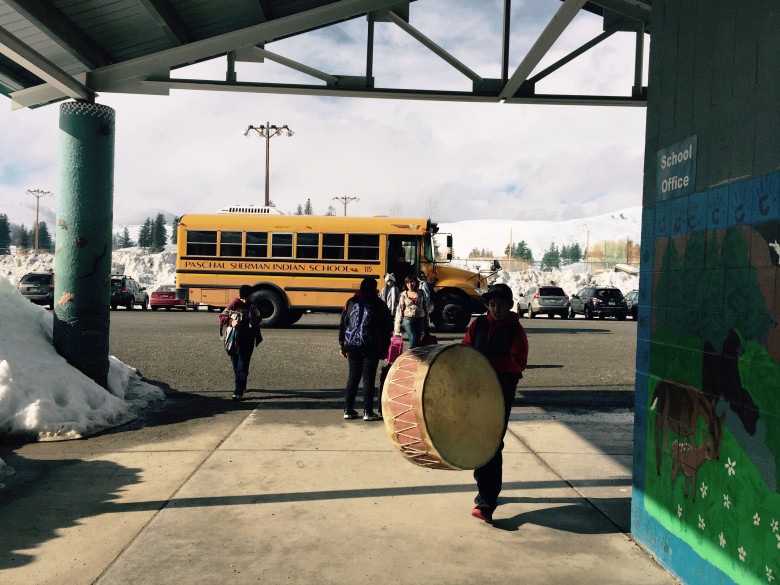 When the ten dancers and drummers from Paschal Sherman Indian School and their two teachers stepped off the bus at Methow Valley Elementary School, third grade students were ready for them. The third grade curriculum includes a year-long journey through Native American studies, beginning with the Wampanoag culture in the New England region and culminating with the Coast Salish people of the Pacific Northwest. The third graders had already spent half a year learning about the traditions, dwellings, language, culture, and customs of several different indigenous cultures. Now they were excited to meet and learn from some members of one of the cultures they had been studying.

The Paschal Sherman Indian School students were ready for the third graders as well. All are members of  Q’uay Kwsa?sus (pronounced Kwigh Ka-sou-ses) –the Blue Sunset Singers—a group that meets weekly at the school to learn the dancing, drumming, and singing traditions of the twelve bands of peoples that make up the Confederated Tribes of the Colville Reservation. The students, ranging from fifth through ninth grades, are learning the history and techniques of drumming, dancing, and singing. Many are learning the skills from their parents, who learned it from their parents, and so on, as was always the custom until very recent years. Others learned to dance and play the drum through participation in the group, under the direction of teachers Tashina Gorr and Michelle Matt. Whatever the source of instruction, the students’ motives are the same as those of their teachers: for these traditions not to be lost to history. 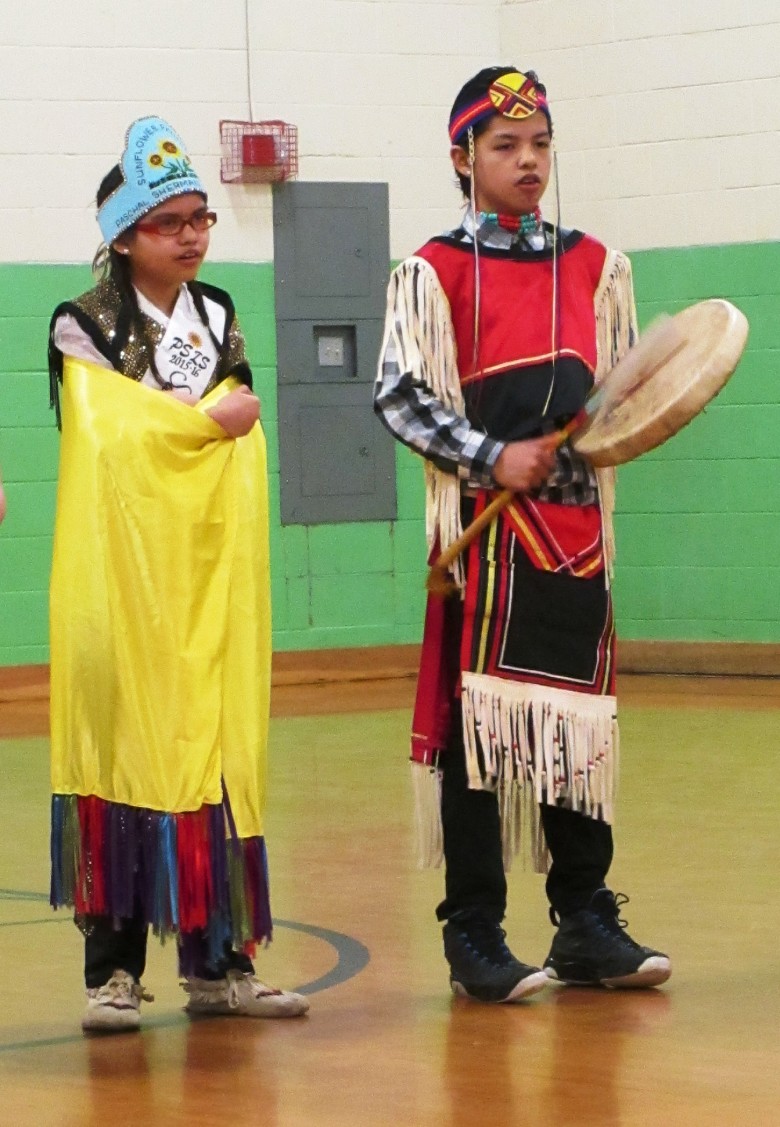 Most of the Blue Sunset Singers wore regalia, which is ceremonial clothing and ornaments worn for performances, pow wows, and other formal gatherings. The Methow students learned that regalia is not a “costume.” It’s not for actors putting on a pretend show—it’s a sacred and prized possession that reflects the spirit and customs of the people being honored. Regalia is unique to each dancer and is often representational. The girls’ shawls in the fancy dances, for example, represent the opening of a cocoon when a butterfly emerges.

The steps of each dance are representational as well, some with a distinctive and delicate toe-heel style of walking in a circle, as if walking on clouds, others with an alternating pattern of the ball of the foot and the whole foot hitting the ground on each step. The Blue Sunset Singers demonstrated both traditional dances (which were held upon return from war or a hunt) and fancy dances (which were developed to preserve Native American culture and religion), as well as a jingle dress dance, which is just like it sounds—a girl dancing dressed in regalia covered with hundreds of little metal cones.

And then the Blue Sunset Singers students invited the Methow Valley third graders to join them in an intertribal dance (which is open to everyone), and the third graders leaped to their feet and began following the dancers in a circle around the gym. 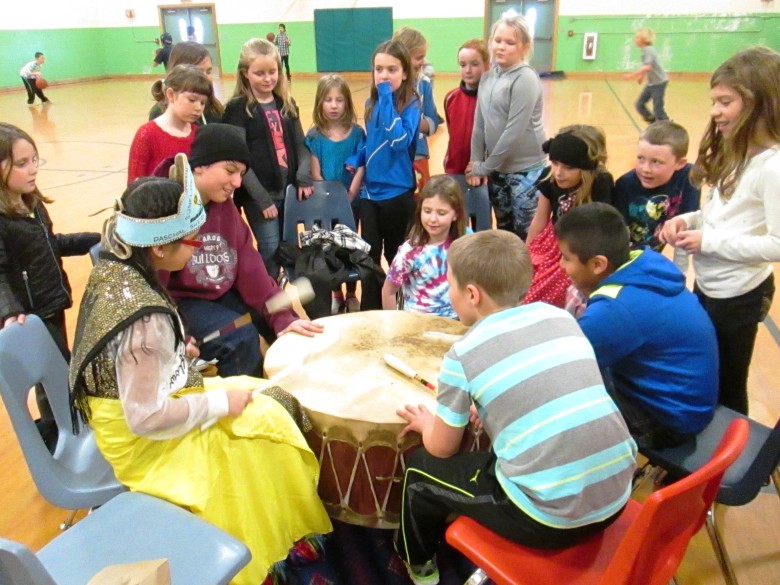 Meanwhile, six Blue Sunset Singers drummers were busy pounding out rhythms on their giant round drum, which is played on its side (like a cookie, as opposed to a wheel) by drummers with soft mallets sitting in a circle around its perimeter, their feet holding the drum slightly off the ground. When the Methow students got a chance to sit at the round drum and learn a rhythm, they did so eagerly, following the Blue Sunset Singers drummers in their beats and their chants. 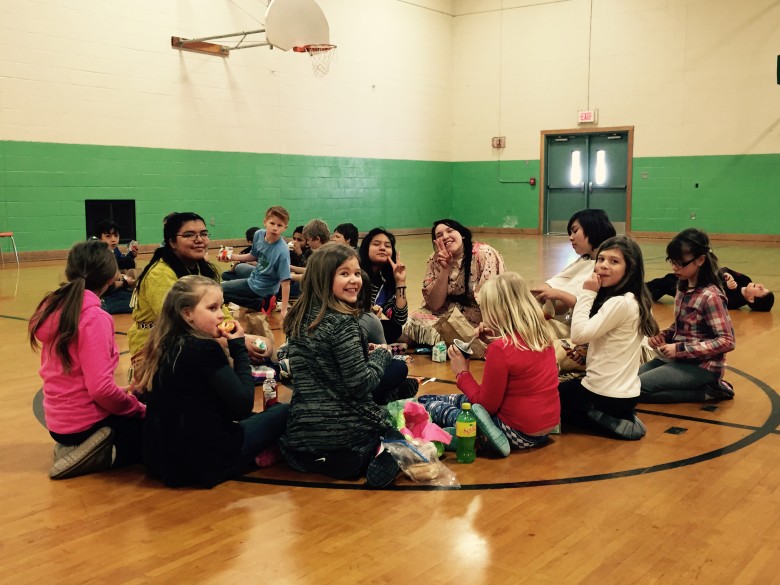 When the students took a break for lunch, the distance between performer and audience diminished, and despite any shyness, age differences, or cultural barriers, the students mingled comfortably and joyfully together; fifteen year olds played basketball with eight year olds, sixth graders showed  third graders the intricate beadwork on their headdresses, and a giant group of multi-age tag players filled the gym with shrieks of laughter. They were all, in the end, the youth of Okanogan County simply enjoying each other’s company in the social interaction and play that transcend all societal and cultural boundaries.

To the Blue Sunset Singers we say “lim lìm!”

This program is part of Methow Arts’ Okanogan Region Arts Education Partnership, which serves 4500 students and 325 teachers in Brewster, the Methow Valley, Okanogan, Omak, Pateros, and the Paschal Sherman Indian School on the Colville Reservation. The program is funded by ArtsWA, the Community Foundation of North Central Washington, the Methow Valley Fund, the Public School Funding Alliance, the National Endowment for the Arts, Icicle Fund, and local civic groups and businesses. 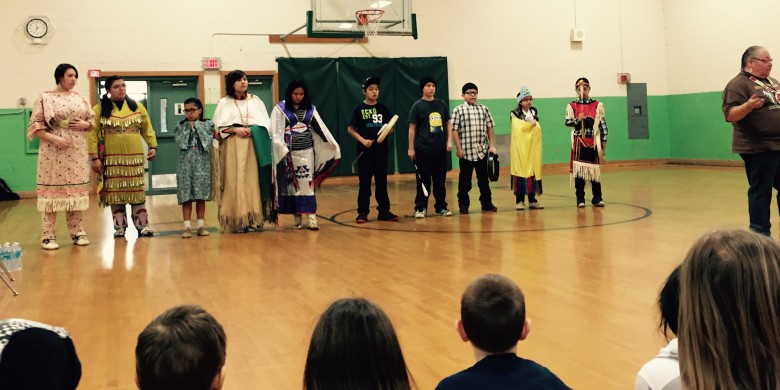