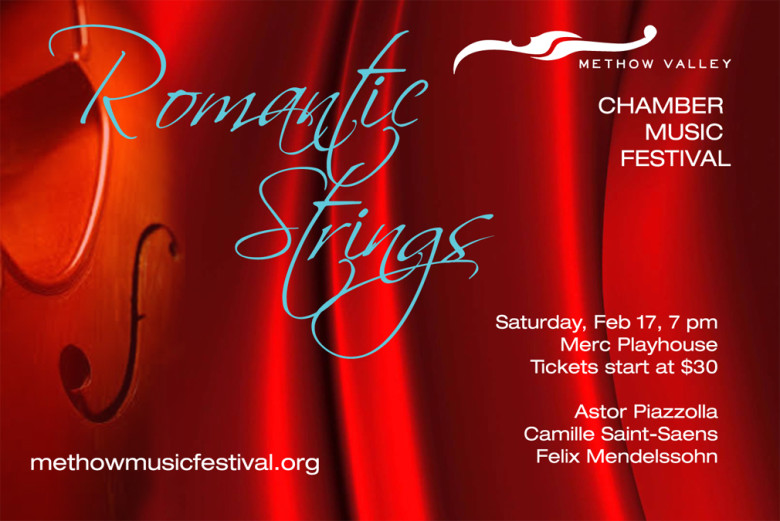 Audiences will hear that artistry in virtuosic performances and impeccable collaboration between violin, cello, and piano in the music festival’s annual Valentine concert.

Krentz is planning a diverse and compelling program. The concert features the Piano Trio No. 2 by Camille Saint-Saëns. “Saint-Saëns was an amazing organist, a prodigy who excelled in creating mind-blowing music off the cuff,” said Krentz. Because Saint-Saëns was considered conservative for the late 19th century, full appreciation for his talents didn’t grow until after his death.

Piazzolla brought the seriousness of classical music to the tango of his native Argentina, expanding the form in exciting new directions, said Krentz. The two Piazzolla movements will let the musicians shine “in a series of wonderful, extended cadenzas with gorgeous solos for each instrument,” said Krentz.

Krentz also plans a masterwork of the repertoire for piano trio by a composer such as Beethoven, Mendelssohn or Mozart, who all composed for that instrumentation.

The concert features Alexei Eremine on piano, who plays with the Moscow Piano Quartet and teaches at Lisbon’s premier academy of music.

Mikhail Shmidt, who has been featured in the chamber music festival’s summer series, is on violin. He also plays with the Seattle Symphony and the Seattle Chamber Players.

Eremine and Shmidt were classmates at the Moscow Conservatory decades ago and still perform often together.

Krentz fills out the trio on cello. In his 11th year as artistic director of the music festival, Krentz performs widely in genres from classical to jazz to electric cello and rock.

The Valentine concert is part of the festival’s commitment to a year-round presence in the valley. Krentz promises a fun evening with components of spoken word and even door prizes.