Spring is almost upon us! All that has been buried throughout the frozen winter months is waiting to burst forth: bulb flowers, bird song, new grass. Out of the fertile, moist earth, our renewal comes forward as we move toward the spring equinox later this month.

April is poetry month, and what a great month it is to celebrate these songs of our souls.   Chaucer chose it to begin his epic series the Canterbury Tales:

Whan that Aprille with his shoures soote
The droghte of Marche hath perced to the roote,
And bathed every veyne in swich licour
Of which vertu engendered is the flour;
Whan Zephirus eek with his swete breeth
Inspired hath in every holt and heeth
The tender croppes, and the yonge sonne
Hath in the Ram his halfe course y-ronne . . .

I can never resist the music of the Middle English! It’s just close enough to our modern speech to resonate like a dream memory, with its sweet showers piercing the drought of March, the liquor that brings forth the flowers, the sweet wind and the young sun having run its half course in the time of the Ram, 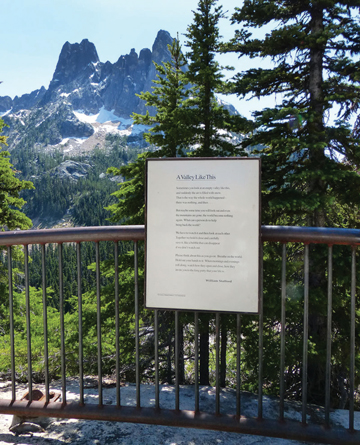 Our Valley is a great place for spring pilgrimages.  One way to enjoy both poetry and nature is to visit the “Methow River Poems” plaques by the poet William Stafford that meander along the river from Pateros to Winthrop. The Forest Service approached Stafford in 1992, a year before his death, to write a series of poems that would reflect the landscape and spirit of the North Cascades. Stafford has long been associated with the expansiveness of nature and of the human spirit. A lifelong pacifist, Stafford’s relaxed and conversational poetics reflect his embodiment as a human being. Writing of a late night flat tire in the mountains of California when the only traffic that passed in the dark was a flock of Hells’ Angels, his son described his father’s “studied slouch,” a relaxation of his body that innately communicated his inner cool. Neither predator nor prey, his Being emanated composure and utter peace with the world.

The first Stafford poem that I read while still in college, a poem that has continued to haunt me to this day, is “Traveling through the Dark.” In spare yet elegiac verse, the poem crisply details the speaker coming upon the body of a pregnant doe on a dark mountain pass, her young alive and unborn inside her, and the logic—why a driver would not have swerved to avoid her—that foreshadows its chilling conclusion:

The car aimed ahead its lowered parking lights;
under the hood purred the steady engine.
I stood in the glare of the warm exhaust turning red;
around our group I could hear the wilderness listen.

I thought hard for us all—my only swerving—,
then pushed her over the edge into the river.

There’s a palpable sangfroid in this speaker, but also a deep humanity. “Traveling” is the title poem of Stafford’s first book, which won him the National Book Award in 1963. In the nearly thirty years between this book and the series that became the chapbook, Methow River Poems, Stafford’s poetics underwent a gradual and organic softening. Of his writing life, he once said, “I keep following this sort of hidden river of my life, you know, whatever the topic or impulse which comes, I follow it along trustingly. And I don’t have any sense of its coming to a kind of crescendo, or of its petering out either. It is just going steadily along.”

Which brings us to the River Poems. Asked by the Forest Service to write poems that might serve as meditative plaques along the Methow, Stafford followed his own “hidden river” to produce seventeen poems, seven of which were originally selected for plaques. Two or three of these are in the area of the Pass. To keep your pilgrimage close to home, here’s a meditation on the four that are nearer at hand.

My favorite of the bunch is the sonnet “Ask Me,” which adorns the plaque located roughly behind Trails End Books in Winthrop, or behind the Farmers Exchange Building, new location: “Ask Me”

Some time, when the river is ice ask me

mistakes I have made. Ask me whether

what I have done is my life. Others

have come in their slow way into

my thought, and some have tried to help

or to hurt: ask me what difference

their strongest love or hate has made.

I will listen to what you say.

You and I can turn and look

at the silent river and wait. We know

the current is there, hidden; and there

are comings and goings from miles away

that hold the stillness exactly before us.

What the river says, that is what I say.

Like “Traveling,” this poem explores a paradox. It begins with an invitation, “Ask me,” and then in stanza two, after the questions one might pose, he says “I will listen to what you say.” But in the end, it’s the frozen river that speaks with its hidden currents that “hold the stillness exactly before us. What the river says, that is what I say.”

But I’m starting in the middle of things. The remaining plaques run from Mazama, or vice versa depending on which source you consult, or where you begin! Let’s start with the plaque at the confluence of the rivers, roughly across from the Rest Awhile Fruit Stand.

Time for Serenity, Anyone?

I like to live in the sound of water,
in the feel of mountain air. A sharp
reminder hits me: this world is still alive,
it stretches out there shivering toward its own
creation, and I’m part of it. Even my breathing
enters into this elaborate give-and-take,
this bowing to sun and moon, day or night,
winter, summer, storm, still–this tranquil
chaos that seem to be going somewhere.
This wilderness with a great peacefulness in it.
This motionless turmoil, this everything dance.

Like “Ask Me,” this poem investigates the paradoxical nature of Nature as experienced through human consciousness. Everything is breathing. Life is “tranquil chaos . . . with a great peacefulness in it . . . motionless turmoil.”   The location of this plaque where the two rivers merge captures that nature of what is fluid and also concrete. Methow. Columbia. Two names for one water on its way to the sea.

Another half an hour south on 153 toward Winthrop brings you to the next two plaques. Between Carlton and Methow at McFarland Creek you’ll find “From the Wild People.” It begins:

Time used to live here.
It likes to find places like this
and then leave so quietly
that nothing wakes up.

Whenever a rock finds what it likes
it hardly ever changes. Oh, rain
can persuade it, or maybe a river
out looking around. But that’s the exception.

This is one of the more playful poems, instructing us in the value of waiting and watching. Time has left the place of the rocks. Some danced and fell exhausted, and some are
“nonchalant.” Like “Ask Me,” there’s a paradoxical stance in the poem. Midway through, he introduces the reader “You can see,” and in the stanza below “Now and then one stirs when nobody is looking, then it stops and looks away.” The shift in perspective from watcher to watched is couched in amusing personification, but it points to a complex relationship between seer and seen: what we look for we often miss.

This brings us into downtown Winthrop and “Ask Me,” which is where this musing began, so we’ll move further south to Mazama and “Where We Are.”

This speaks with the same poignancy and humility as “Ask Me.” It begins in fog and rain and ends in the importance of human connection.

Daylight will love what came.
Whatever fits will be welcome, whatever
steps back in the fog will disappear
and hardly exist. You hear the river
saying a prayer for all that’s gone.

And at its end, the human is introduced, “unless we hold on, unless we tap like this.” We must learn to live like the fog, like the rain that “convert[s] one boulder at a time into a glistening fact.” We must tap our own message of conversion: “Friend are you there? Will you touch when you pass, like the rain?”

If you have the stamina to go as these poems ask us, all the way, to touch and see and become, then you will experience more than what the vistas, the river music, the trees, rocks and clouds themselves convey.

The word poetry comes from the Greek and means “a made thing.” A poem is not an accident. It’s not a natural occurrence. It’s a translation or interpretation of what is experienced by these sensitive instruments of human consciousness into something that is at once greater and less than what they have perceived. Commissioning these plaques was a gesture toward this truth. We can read the poems in the comfort of home; we can hike and imbibe the trails’ messages directly through our senses. And in a handful of places, we can experience both our own and another’s impressions, a synesthesia of sorts, where the written word lands in our heads, our hearts and our bellies to nourish the deepest parts of us.

Methow residents Curtis Edwards and his wife Sheela McLean placed the Stafford poems on the river in 1993-94 while working for the Forest Service. “It started as interpretive signs about the river (Respect the River program) and developed into the companion signs when we went looking for some truly inspiring writing, ” says Edwards. “The Methow River poems were some of the last he wrote.” Edwards has recently repaired and replaced several of the plaques throughout the valley. Explore our Public Art Map to find the locations of the Methow River Poem plaques in the Methow Valley. Contact: info@methowartsalliance.org, 509.997.4004.

If you have an interest in submitting writing, photography, artwork or poetry in our ART Magazine, please email us at info@methowartsalliance.org for information.