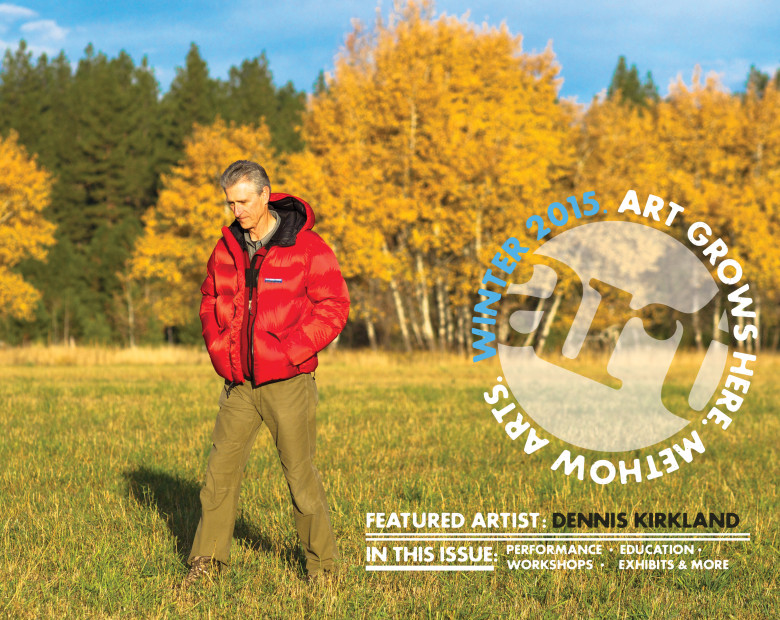 Photos of Dennis by Donni Reddington

Dennis Kirkland has scaled mountains, gone out hours before dawn, and raised butterflies, all in pursuit of the perfect photo. But his most popular photo – of a beguiling green Pacific tree frog nestled in a single petal of a crimson dahlia – was taken just outside his back door.

“This is probably my most popular picture,” said Kirkland. “We had a big dahlia garden, and I went out on a fall morning and found the frog.” He went back into the house to get his camera and a macro lens and had about half an hour to take photos before the weather warmed and the frog took off. 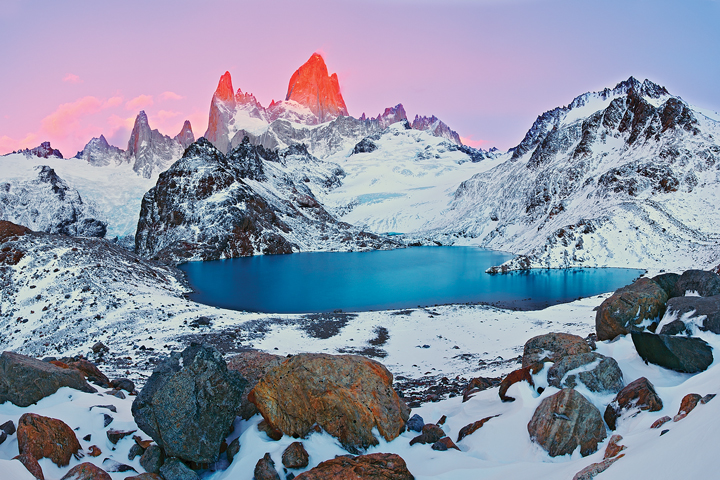 Like stumbling upon a tiny frog, all photography involves an element of serendipity – the light has to be just right, the subject cooperative. But Kirkland does scrupulous planning to be prepared for those discoveries. An avid traveler, he schedules trips to maximize the visual potential, thinking about the weather and the angle of the sun. In spite of all that, “most of the time, the light’s lousy,” he said.

Kirkland started capturing the world on film 50 years ago during a stint in the Navy. He brought along a movie camera – his father had been a film buff, so the medium was familiar – and filmed the sights and culture during brief breaks in Japan, Korea, and the Philippines. “It was a way to record my experiences,” said Kirkland, but he found he wanted more control over the process. He soon bought a still camera and three lenses.

That camera accompanied him on river rafting, backpacking, and mountain-climbing expeditions. He shot the scenery, his friends, and his family, and often presented an informal slide show when he got home. “It was a nice way to share my photos and relive the trip,” he said. The photography was just a casual part of the experience. 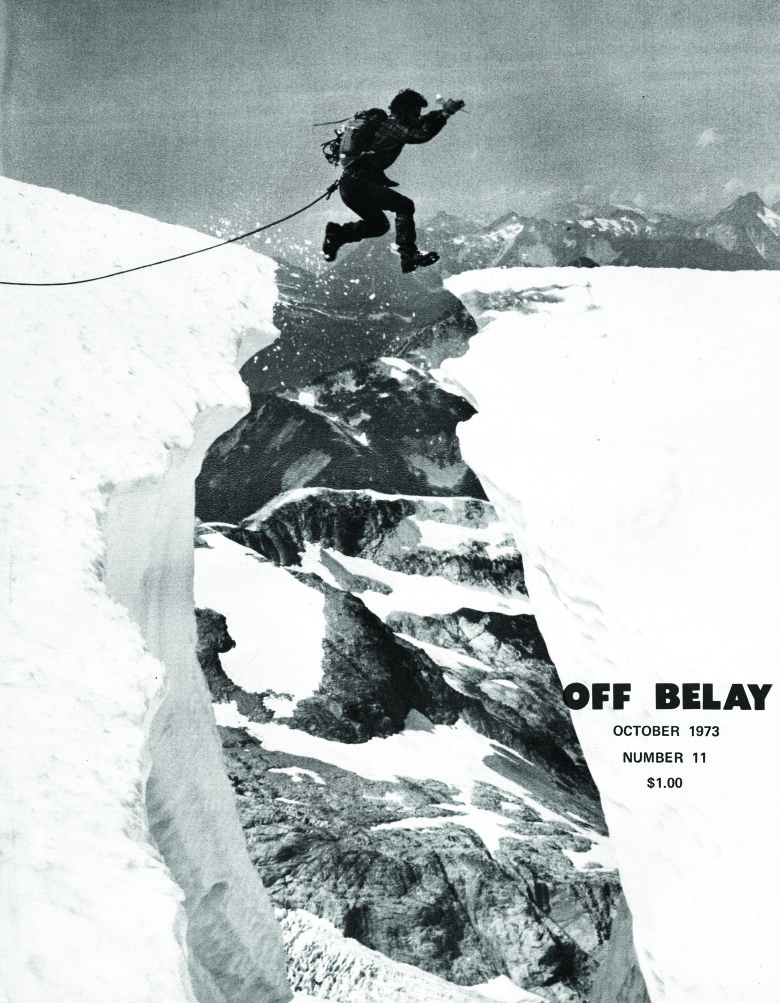 But even in those days, Kirkland was attuned to unusual juxtapositions. In fact, his first published image is an arresting black-and-white photo of a daring jump over a crevasse, the climber suspended mid-air.

Kirkland took the shot on a climbing trip in the North Cascades. As he and the other climbers walked across the glacier, Kirkland spotted the photographic potential. Unlike most glacial fissures, this one afforded a seemingly infinite view to the peaks below.

Kirkland and a friend planted their ice axes in the snow and secured their climbing ropes around the axes in preparation for an 8-foot jump across the gaping crevasse. Kirkland made the first leap while his friend snapped his photo, and then they switched roles. “It was not a great athletic achievement, but it was kind of gutsy because, if you missed, you could fall a long ways,” he said.

The photo made the cover of Off Belay magazine in October 1973, but it was incorrectly credited to Kirkland’s friend, who had submitted it to the magazine. Kirkland still shrugs off the mistake, noting instead the elements of the photo that had excited him – how his friend is framed perfectly above the mountain tops.

That early photo contains many of the themes Kirkland returns to in his serious photography today – the mountain scenery and the sense of being perched on the edge, which gives the viewer the impression of being there, too. 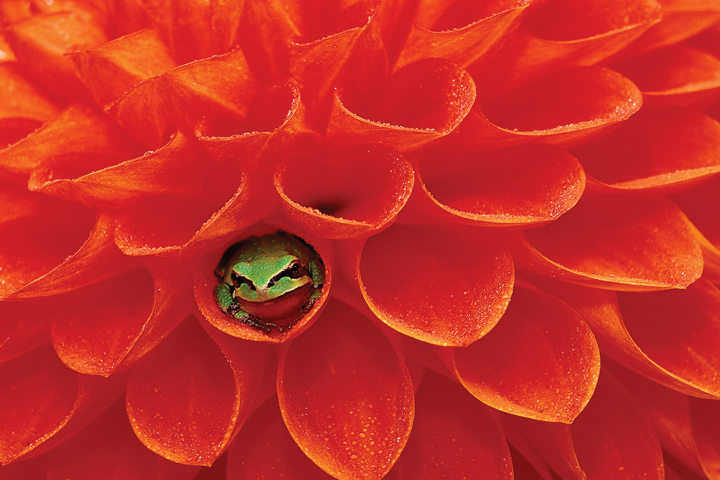 Kirkland pointed to a shot of a waterfall in a lush forest on the Olympic Peninsula. “I just love the detail in this,” he said. “You feel you can walk into the scene.”

While standing above a waterfall may look less precarious than leaping across a crevasse, Kirkland had perched his tripod just 2 inches from the edge of the cliff overlooking the falls. He almost always uses a tripod for landscape photography so he can be deliberate about the composition.

Kirkland typically takes half a dozen shots of a scene, each with a slightly different exposure or shutter speed. For waterfalls, he favors for a balance between the milky blur of the water and a little spray frozen in mid-air. 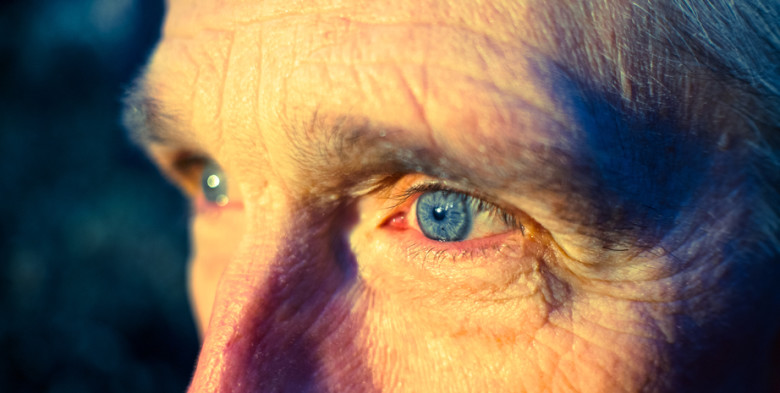 tos are characterized by intense color and clarity, meticulous attention to detail, and a sense of immediacy – suggesting that you, as the viewer, are fortunate enough to be in this extraordinary place at this special moment.

Kirkland said one of the first questions people ask him is if he alters the color of his photos. “I’m trying to make this look as beautiful as I can, to me,” he said. “It’s a combination of saturation and color intensity that’s artistically pleasing.”

A mechanical engineer by training, Kirkland likes figuring out how to use the technical aspects of photography to achieve his aesthetic goals. Even images that look like “trick” photography grew out of his interest in various techniques – some quite old – that take advantage of camera movement or optical effects.

But Kirkland may use those effects in unusual ways. Panning the camera to capture motion may have been an obvious choice for a lion in Africa, freezing the animal while blurring the savannah it’s running through.

But Kirkland also tried the effect on a stationary subject – a simple stand of pine trees in winter. The camera movement reduced the white of the snow and the sunlit trees to abstract stripes.

Another technique Kirkland has embrace 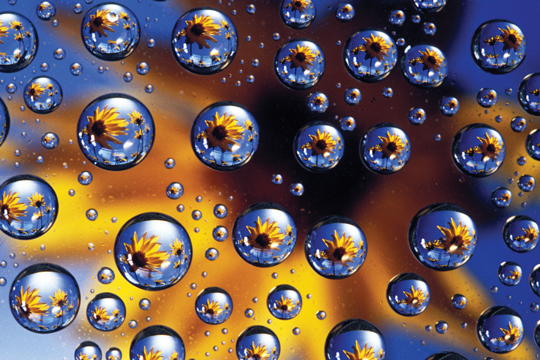 d is to photograph a subject through a dewdrop. The droplet functions like a really wide-angle lens, able to contain a vast scene, as in his photo of Mount Rainier in a droplet of water.

Most of Kirkland’s trips are geared towards photography, but his photos are not your standard tourist snapshots. “I have several photographer friends I travel with. Everyone wants to get up before dawn,” he said.

Kirkland met one traveling companion at a photo exhibit in Seattle. They both had several photos in the show, including images of the same arch in the Southwest. “Bob’s was a totally different vantage point. I loved his perspective,” said Kirkland. They instantly became friends and have since taken several trips together, including to Alaska and Iceland.

Kirkland’s travels have also taken him to Peru and Guatemala, Kenya and Tanzania, England and Scotland, Bhutan, and Patagonia. In many of those places, he concentrated on themes that have always attracted him, like mountains and water features, but in some countries – primarily in Latin America – Kirkland turned his attention to portraiture.

On one trip, Kirkland visited remote Andean villages. He was traveling with his daughter, a fluent Spanish speaker, so they were able to meet the people.

“A fun part of taking pictures in different cultures – particularly places with few Western visitors – is that I showed people the first pictures I took and got a positive response. Then, when I took more, they were more animated and less stiff,” said Kirkland. His photo of a little girl and an alpaca in the Andes captures two uncannily similar expressions.

Kirkland’s Bhutan photos bring together many of his favorite themes – vibrant color, striking architecture, and traditional arts. Kirkland was working on a photo of a lavishly filigreed temple when a monk emerged from the building and the wind caught his robe, turning it into a billowing red triangle.

Even on a trip not specifically organized around photography, Kirkland spends his days scouting for material and then goes back out after dark to shoot water or street scenes in the glow of streetlamps. “In London, every night I was out walking the streets with my tripod, while everyone else was asleep,” he said.

Kirkland has always been resourceful. When he was in college, he made his own ski pants and rain gear. “I had no experience, but I did it to save money. I’m really interested in how things are built,” he said.

Nevertheless, Kirkland worked only two years as an engineer. “I was bored silly,” he said. He became a high school industrial arts teacher and then helped a friend design and build a house. Building appealed to him – he liked seeing an idea take shape and coordinating a big project. He spent the rest of his career as a general contractor.

Despite his enthusiasm for the technical side of his art, Kirkland acknowledges that it requi 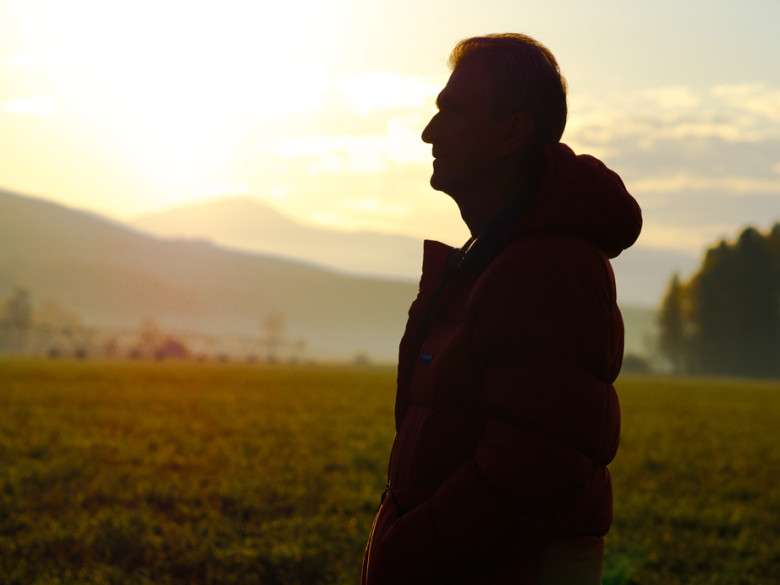 res patience. “Post-production can get tedious, but it’s so remarkable what you can do with the software. If I’m happy with the image and can get a good print, it’s really gratifying,” he said.

“It’s just my nature – when I really get involved with something, I really give it 100 percent. It’s just my temperament, whether it’s photography, butterflies, or building a house.”

The butterfly project was the quintessential Kirkland endeavor – it combined resplendent colors, patterns, and textures; a methodical process; and dogged perseverance.

First, Kirkland had to obtain a permit from the U.S. Department of Agriculture to be able to raise butterflies and moths. The foreign specimens arrived live, flattened in glassine envelopes. The domestic ones came as chrysalises, which he raised himself.

As each butterfly emerged, Kirkland was prepared with a flower he’d chosen to accentuate its color and markings. He used local wildflowers and tropical blooms from Hawaii, many of which he also germinated.

“It was strictly art – I could care less about documenting nature,” he said, noting that he had no qualms about placing a butterfly from the Northwest on a Hawaiian bloom. “It was just the pretty juxtaposition of the butterfly on the form.”

Kirkland used a dowel to position the butterflies. Most of the insects cooperated, but some would escape to a window, only to be chased down and repositioned. “It took patience,” he said.

Kirkland once spent an entire summer photographing rocks. He constructed a portable studio with cross-polarizing filters to minimize reflections. “It was a lot of fussing around, but I’m pretty good at technical stuff,” he said.

Kirkland’s rock photos – many of which resemble miniature landscapes – were often made from sections of rock no more than an inch wide. Kirkland likes how the framing eliminated all sense of scale, distilling the stones to color and pattern.

Kirkland has had an unexpectedly long hiatus from photography this past year. It started with designing and overseeing construction of a new house for himself and his wife, Mary Ann.

The Kirklands’ old house sold quickly and they were staying at a neighbor’s house when, in August, the deadly Twisp River Fire destroyed both their former home and the place where they were living. Mary Ann just barely got out, and Dennis lost all his camera equipment, his tripod, and his computer in the fire.

Many of their belongings – including his framed photos and back-up hard drives – were in storage, but he has yet to replace his camera and lenses. At the moment, he has nothing more sophisticated than a cell-phone camera.

Although they’re settled in their new home, Dennis and Mary Ann are still reeling from the loss, particularly now that the initial shock has passed. But Kirkland is ready to get back to photography and to travel.

“It’s fun thinking about the next place to go. I’m a real organizer and planner,” he said. Next on the agenda is winter photography in the Canadian Rockies.

Kirkland’s photography can be seen at the Winthrop Gallery; the Altitude Gallery, run by his daughter in Bozeman, Montana; and his own website, www.denniskirkland.com. He also sells through a stock photo agency.