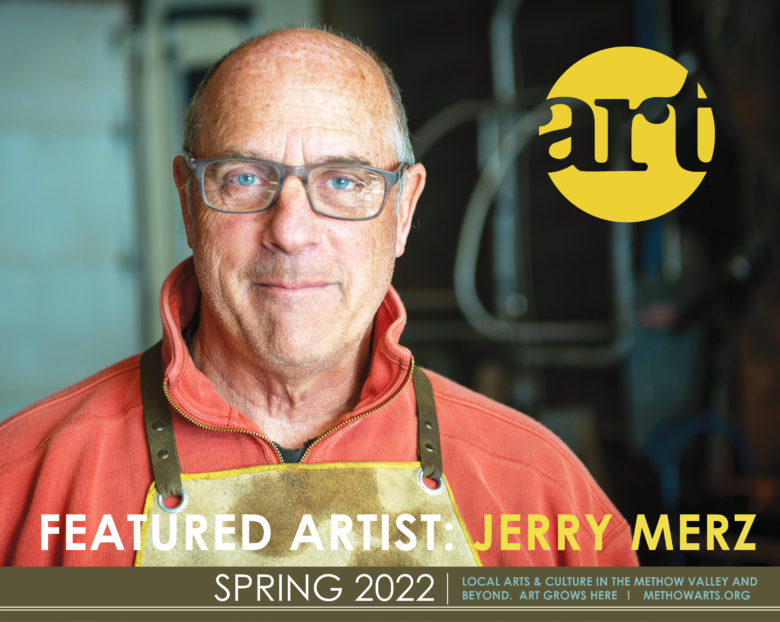 Jerry Merz turns steel into delicate florets, elegant vines, and geometrically precise latticework with a deftness that seems almost magical, given that this refinement emerges from an atmosphere of fire, hammering, and ear-splitting noise.

Merz first discovered metalwork 22 years ago, when he dropped into an open-forge night held by Methow Valley blacksmith Roger Olsen. He was immediately captivated. “Sometimes, something in life goes beyond grabbing your attention. I knew nothing about it – I just saw a candlestick someone had made at an open-forge night. I was amazed.”

Soon, he was a regular at the open forge. He’d arrive early and have to be sent home because he stayed so late. “It was awe-inspiring. I had never contemplated the concept of cutting, twisting, bending, and drilling steel with other forms of steel,” he said. 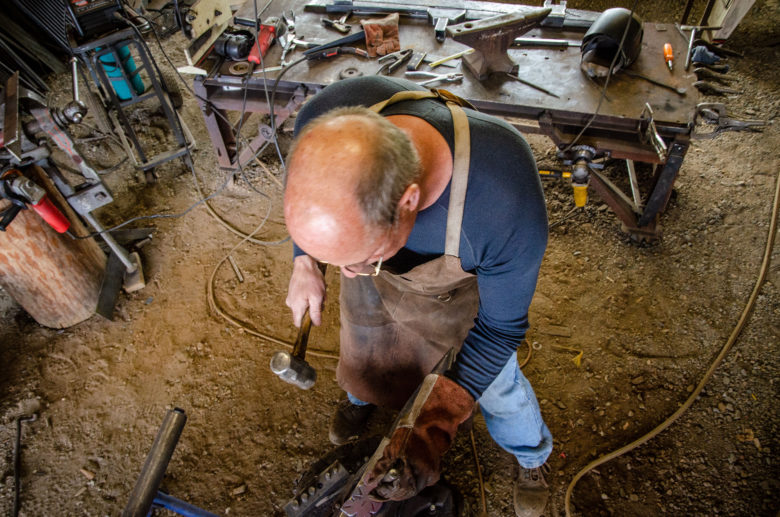 Eventually, Merz acquired some tools and gave himself a year to learn and experiment with metal. He made a lot of stuff – and threw most of it away. But a year later, he launched Methow Metalworks. “Even now, 24 years later, I just can’t wait to come to my shop. I love it,” he said.

Merz has always been interested in art but, until he discovered metal, it was just a hobby. As a kid, he would cover his notebooks with doodles and, in college, he made and sold macramé necklaces for the pure enjoyment of it. He’s also done some chip carving, creating intricate and decorative surface designs. 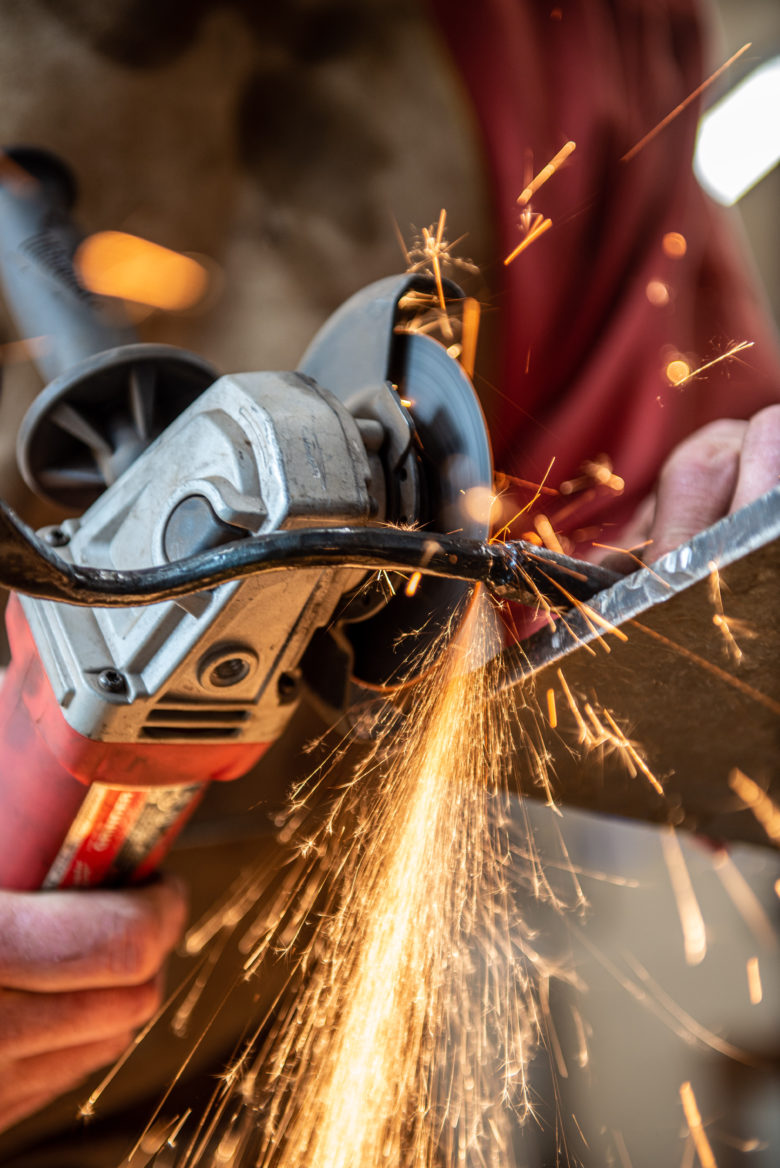 The introduction to metalwork came at the perfect time in Merz’s life, although he wasn’t looking to change direction. “What’s driving my metalwork – designs, connecting with people – has nothing to do with money and success,” he said. And that’s a luxury that allows him to be more creative, he said.

Initially, Merz specialized in custom lighting, from ornate chandeliers to Craftsman-style sconces. But as he started to get commissions for drawer pulls, towel racks, and railings, he branched out.

Today, he makes small, decorative pieces like ornamental hardware for cabinets, and large items like chairs and architectural ironwork. He gets a lot of demand for gates. Some are geometric, but many incorporate elements from nature, including lacy vines and tendrils, flowers, and craggy mountains. In one challenging project, he bent metal railing to follow the contours of two sinuous branches for a banister. 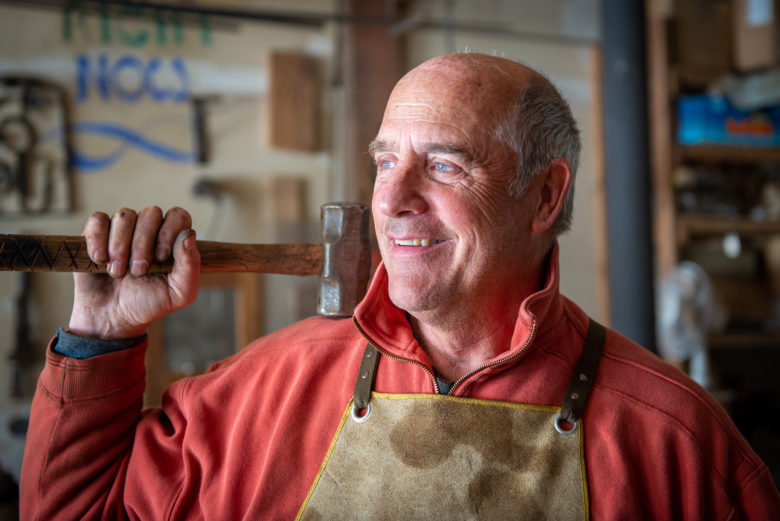 Transforming a steel rod into a work of art requires a complex process of heating, hammering, manipulating, and cooling. Merz typically draws his designs on the computer, and then modifies them while working.

Merz starts by heating a one end of a rod in the forge until it glows orange hot. For smaller pieces, he may use an acetylene torch.

The initial shaping is often done with a power hammer to flatten and contour the rod. Holding and turning the rod with heavy gloves or tongs, he strikes it with the power hammer. After the initial manipulation, Merz switches to a sledgehammer, pounding the piece against an anvil.

The anvil isn’t merely a surface to support the steel while he whacks it. A good anvil performs a surprising range of functions. Anvils offer many contours – there are right angles for making well-defined corners, and tapered, rounded edges on the horn for an infinite variety of curves. As he works, Merz shifts the piece to different parts of the anvil, coaxing it into gentle bends or complex spirals. The anvil also has slots that will hold a rod in place so Merz can manipulate it.

With well-placed blows with the sledgehammer, Merz can flatten and elongate a piece of steel, make it round, or coil it. He can create spirals and braids, and punch square or round holes. A quick dip in a barrel of ice water cools the steel enough for him to handle it.

For larger projects like gates, Merz welds individual pieces together. He typically finishes a piece by sandblasting it, and often applies a final chemical treatment to add a patina, such as rust, antique bronze, or blackened steel.

TOOLS OF THE TRADE

Metalworking is an ancient art, and some of Merz’s most prized tools are more than a century old. The power hammer dates to 1910 and is activated with a foot pedal that engages a clutch. “It’s really a cool machine – it’s the best tool I have,” Merz said. 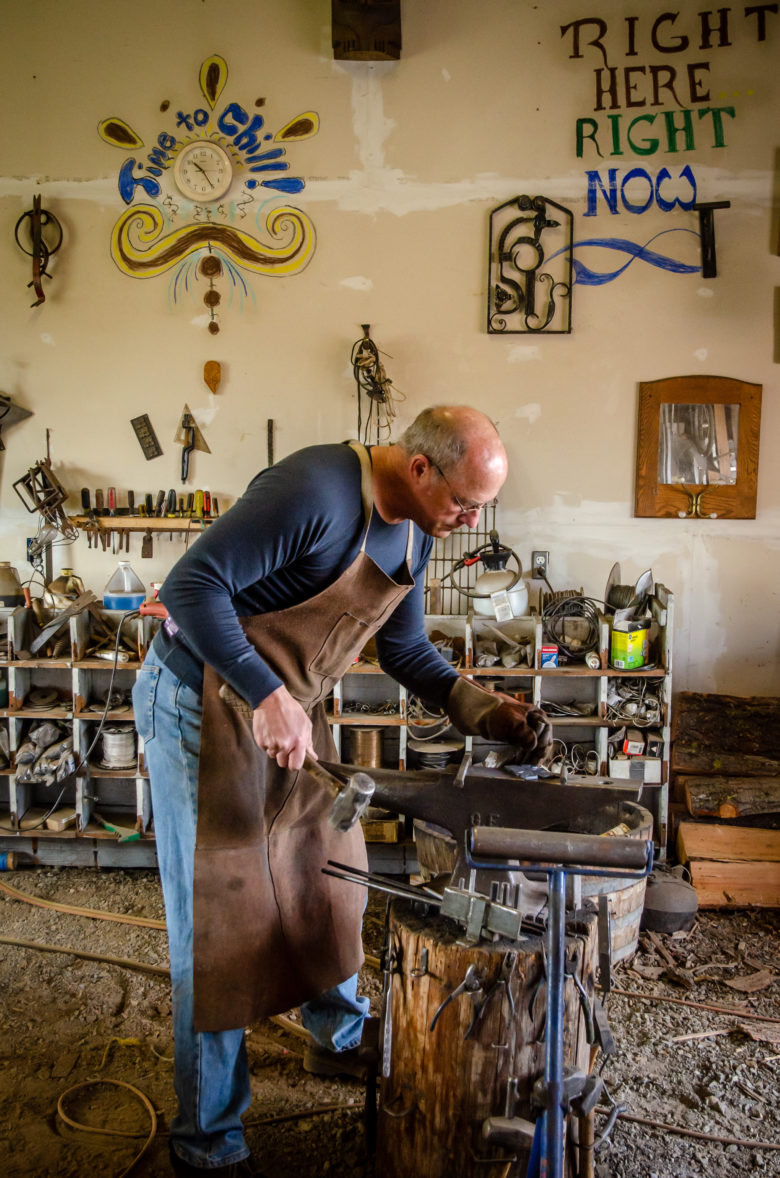 Merz built his own forge from an old pipe he got from a local well driller, which he reinforced with refractory cement. Olsen helped him refine the design, even incorporating an old hair dryer for additional oxygen so that the forge burns hotter.

He has two anvils, one made from forged and tempered steel, and the other made from cast steel. When Merz whacks the tempered anvil with his hammer, the hammer springs back up with a lively recoil and the room fills with a ringing sound. “It puts more energy into the bounce of the hammer,” he said. On the other anvil, the hammer lands with a dull thud. The responsiveness of the tempered anvil is key when Merz wants more subtle control. 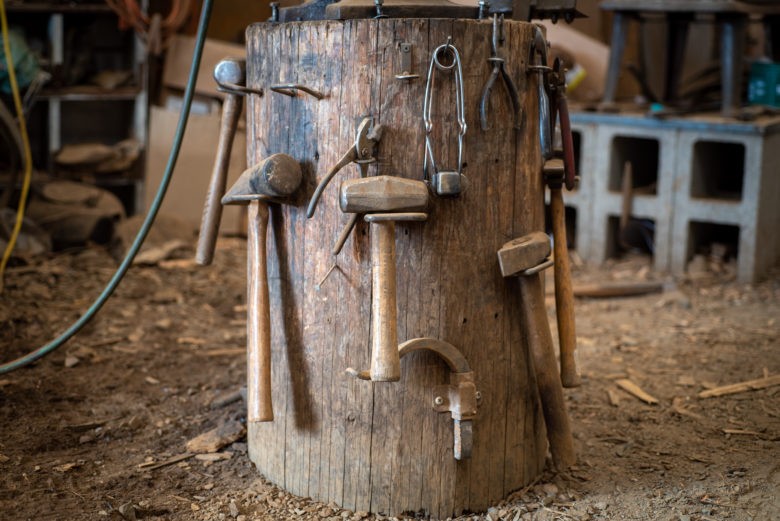 Merz has dozens of hammers with heads in a range of sizes and shapes, from pointy to rounded. He has punches that make round and square holes, and tongs with different ends. There are round and straight chisels and a large collection of vice-grips.

Merz also uses more contemporary tools, like a plasma cutter that enables him to cut any shape he desires, which he does freehand.

An advantage to being a metalworker is that he can make any tool he needs. If he needs a certain type of chisel, he simply grinds an edge on a piece of steel and attaches a handle.

Merz also appreciates the forgiving nature of metalwork. If he wants to change or correct something, it’s easy to cut it out and weld in a new piece. “I really like that about steel – you can always fix it – unlike wood, where you only get one chance,” he said. 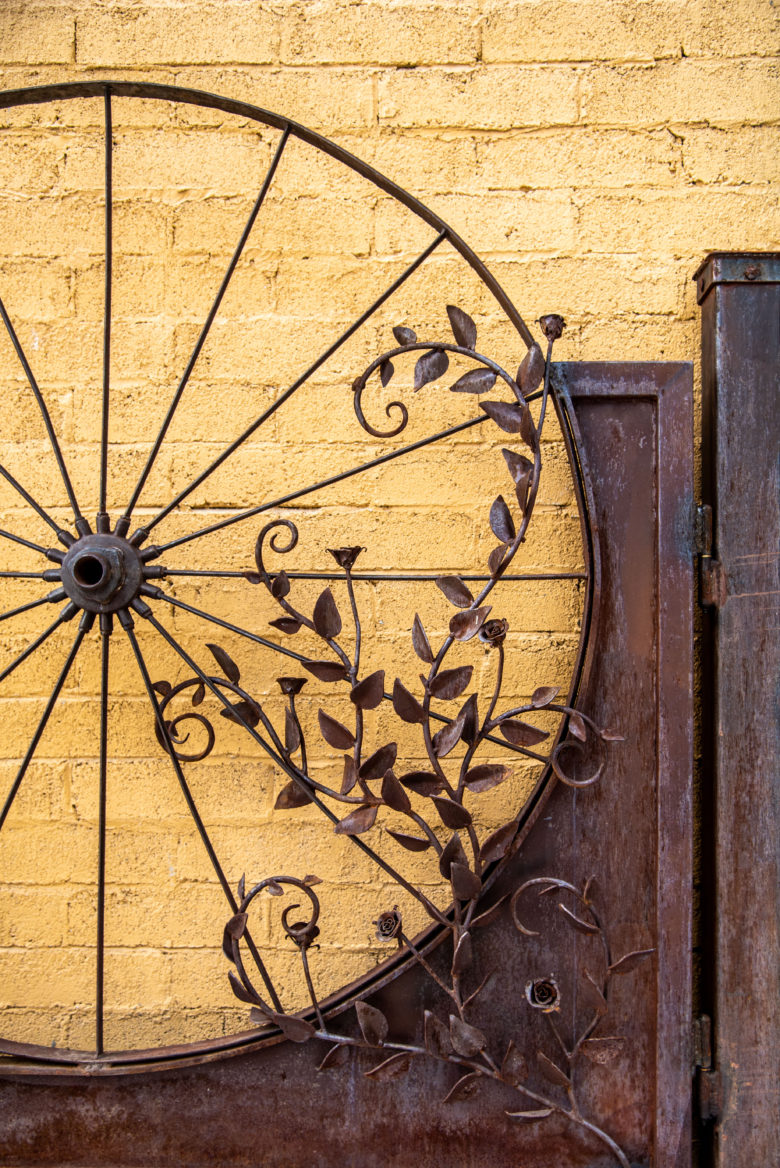 In 2010, with his business slow during the recession, Merz took a break from metalwork and volunteered in Zambia for two years. His assignment was to provide an economic path for graduates of a private high school during the transition from their formal education to their return to their villages.

Merz didn’t expect to use his metalworking skills in Zambia, but it turned out the village had a need for objects like trusses, security gates, and bed frames.

Merz managed to acquire a welder and some basic tools and started a metal shop for the graduates. He taught metalworking to three young men whose previous job had been maintaining the grounds at the school. He taught one of the graduate women to manage the business. 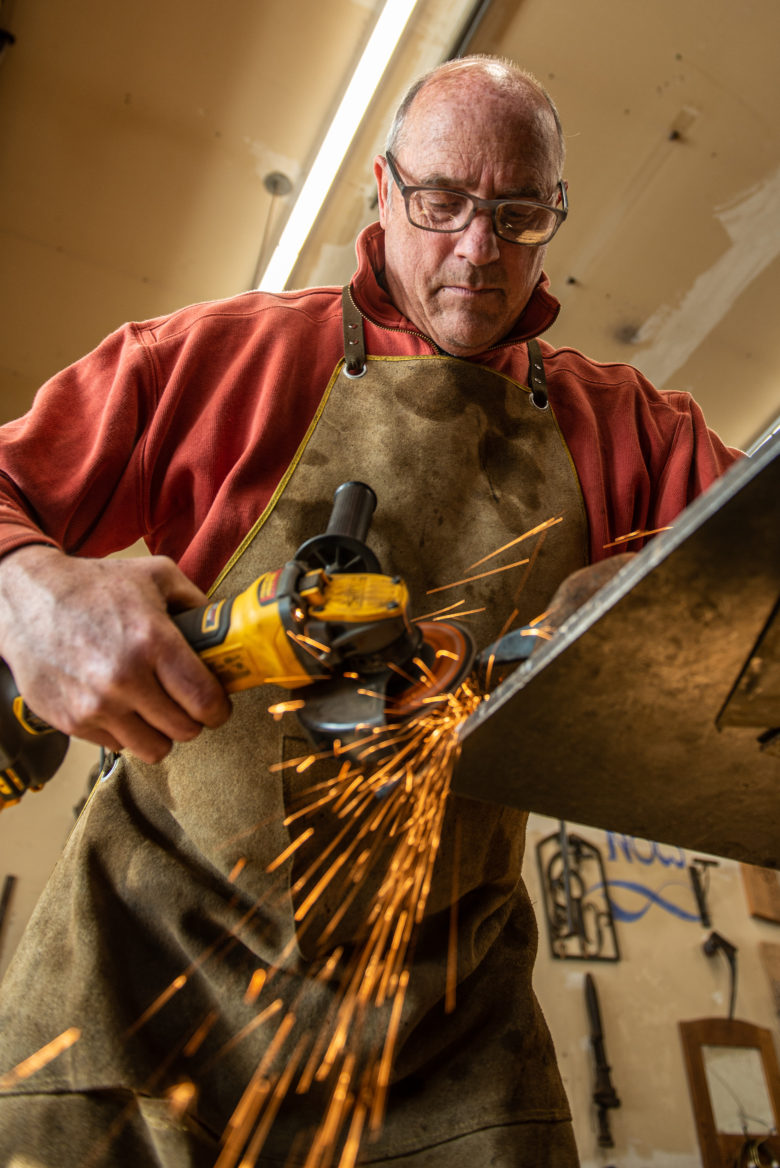 More than a decade later, the Pestalozzi metalwork shop is still going strong, run by the same three men. They’ve developed a specialty in decorative security gates for doors and windows, and also make tables and other practical items. Although many people in Zambia can’t afford elaborate ornamentation, the Pestalozzi artisans will find a way of incorporating a small adornment that adds a touch of beauty, Merz said.

Merz loves mentoring people who share his fascination with metalwork, especially when they’re kids. “I’ll normally drop what I’m doing to work with a kid,” he said. Merz remembers a 10-year-old girl who stopped to watch at his TwispWorks shop. It was clear she didn’t want to leave, and she ultimately convinced her parents to bring her back.

Merz offered to show the girl how to make a small item out of metal. “She could barely swing the hammer,” he said. But an hour and a half later, she’d made a hook. “After the final coat of finish, she walked out like she was carrying a baby in her hand,” he said.

Merz has also worked with a student from the Independent Learning Center, teaching him about metalwork. “It’s like a magnet when a younger person shows an interest in the metalwork,” he said. The steel ends up being a connection that builds mutual interest, he said. 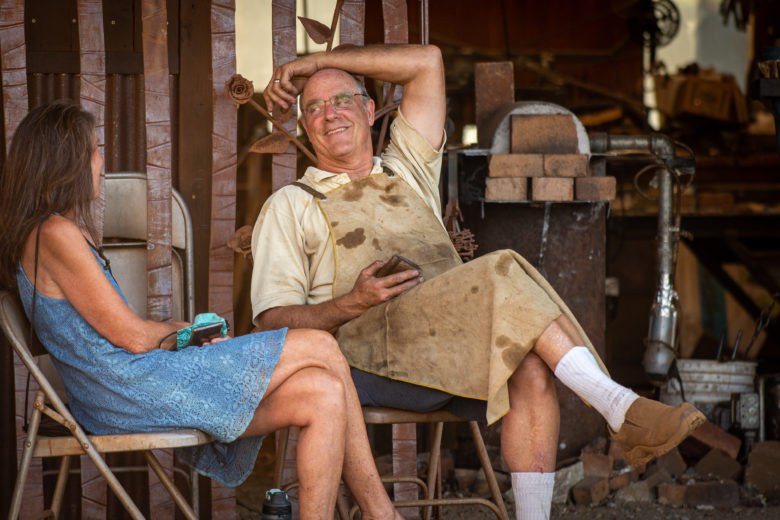 While Merz loves the work, he concedes that the noise and physicality can be overpowering. Working around a burning forge in the summer is uncomfortable, but he becomes so absorbed in what he’s doing that he doesn’t even notice the heat. “When you’re at the forge, it’s kind of intense work anyway,” he said.

“The heat, noise, and physicality – my arms get tired, I’m sweating like crazy, it’s noisy. There’s a lot of energy in it that I like being around,” Merz said.