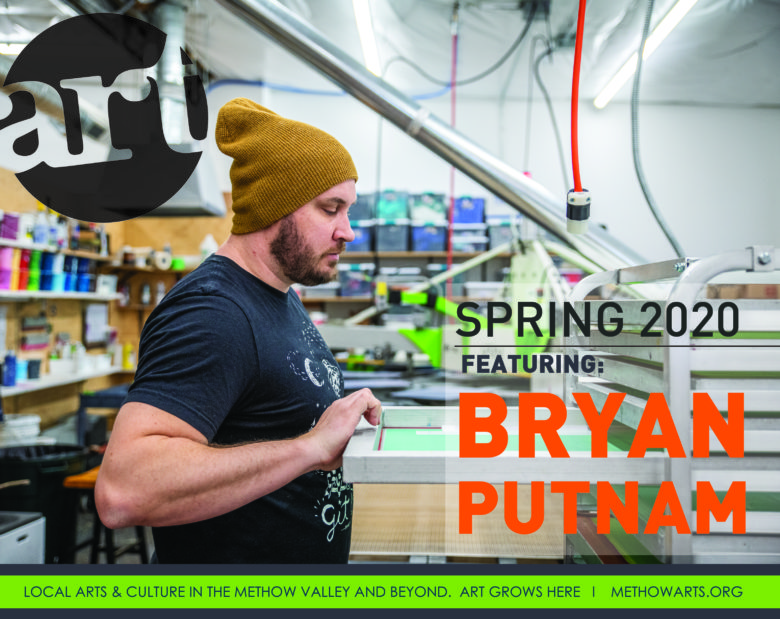 Bryan Putnam takes ordinary items of daily life like T-shirts and hats and turns them into a kind of mobile art gallery for his vibrant screen prints.

“An easy-to-collect graphic T-shirt is the most democratic art form,” he said. It blends the graphic elements of saturated sumi ink with the aesthetic of woodcuts and lets him add vivid colors. 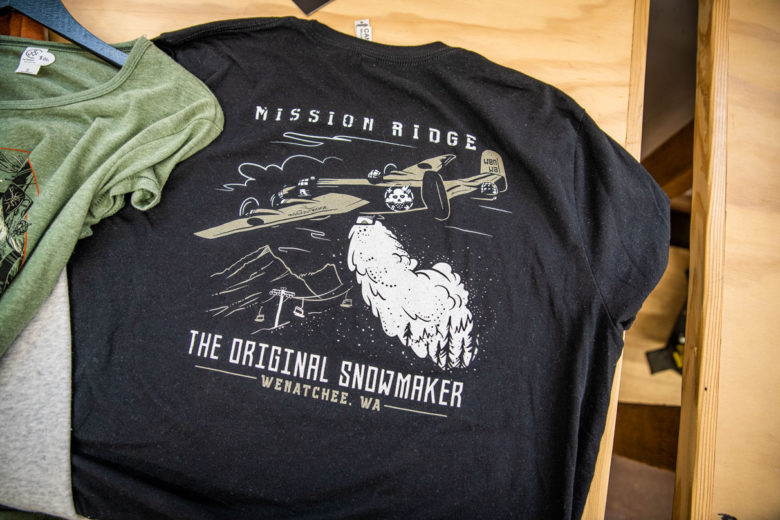 “Printmaking is important because it’s a fusion of art and daily life in ways other art can’t be,” Putnam said. “It democratizes art because it’s affordable and can go a lot of places. There’s something really cool about an ephemeral print on paper or fabric.” 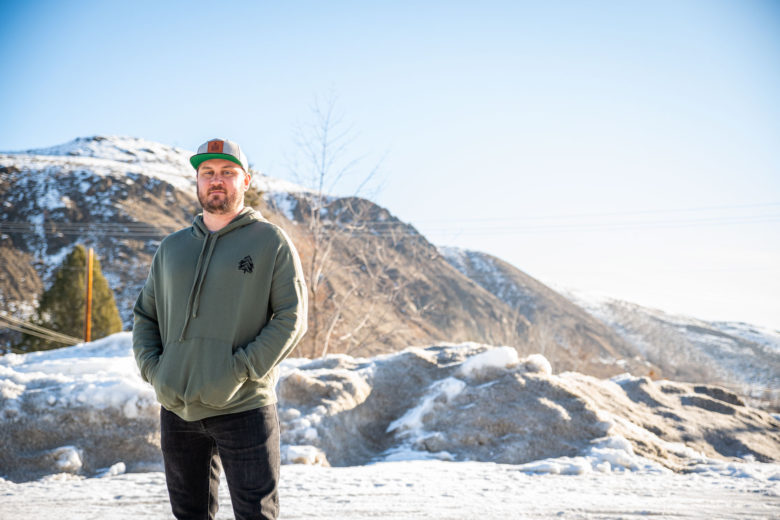 Putnam was one of those kids who drew as soon as he could hold a pen. He created his first cartoon character, Mr. Bubble, at age 4. “From early on, I wanted to make drawings that told stories,” he said. “I had the realization at 4 that I could create a world on this paper in front of me. It was the coolest thing I’d ever experienced, and I’ve never wavered.”

That lifelong passion launched Putnam on a traditional path. He studied art in college and got a Master of Fine Arts in visual art. He exhibited mixed-media pieces in galleries and was building a solid career as a professor of printmaking and drawing at the University of Oregon.

While Putnam loved teaching, he wasn’t creatively fulfilled. So Putnam and his wife, who both grew up in the Methow Valley, picked up their young daughter and moved back home in 2016. Putnam juggled five jobs while “trying to figure it out.” 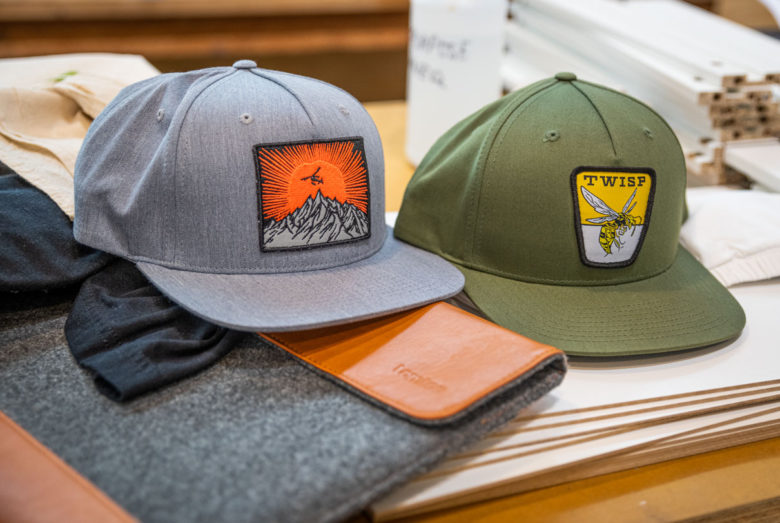 He’d already been putting his art on T-shirts as a way of disseminating his art in an affordable way. To some degree, his screen-printing business, Pinetooth Press, grew organically as demand swelled. By January 2017, Putnam had opened his first print shop in a small storefront in Winthrop.

Later that year, to accommodate his growing business, he and his wife Regan bought a 5,200-square-foot space in Twisp and renovated it as a design and production facility. A loan from the Methow Investment Network helped them buy state-of-the-art printing equipment. Today, Putnam’s studio houses a massive automatic screen-printing press and a computer-driven embroidery machine. 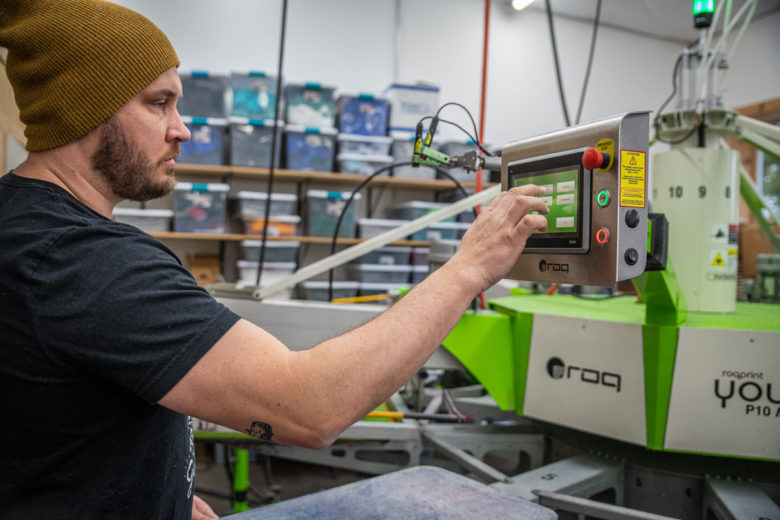 Putnam sees his work as fusing fine art with graphic novels and comic books. “My artwork comes out of the childish, simple wonder of making an entire world by putting marks on a blank surface,” he said. “I could make things that were not otherwise possible, and knew it’s what I wanted to do.” If you don’t count the computers and high-tech printing equipment, Putnam’s creative process hasn’t changed much. “It’s how I drew as a kid. I’d grab a stack of cheap paper, pencils, and pens and doodle, just to make things happen,” he said. Once he’s satisfied with a composition, Putnam refines it with digital drawing tools on his iPad and adds color.

Putnam’s graduate program was interdisciplinary, and it challenged him to create art for gallery exhibits. “It was really amazing, and it really stretched me,” he said. 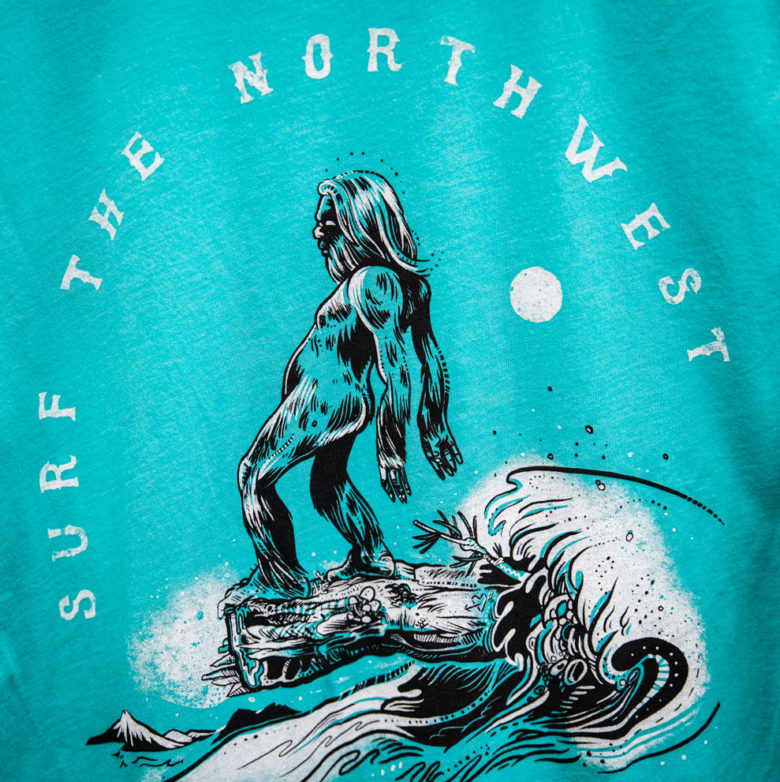 But when he discovered silkscreen printing, he was hooked by the immediacy of the colors and the speed of the printing. “I feel at home putting things on T-shirts, making little things that mean art to someone – this ephemeral thing. That’s what I’m inspired by,” he said. “I had to find my footing. I realized I didn’t relate to the gallery setting.”

Growing up in the Methow has shaped Putnam’s interests and aesthetic. “It’s always been about the confluence of humans and wild nature – it put that in my brain early on,” he said. Putnam’s designs capture the experience of mountains and of Northwest culture, often with a comedic element. 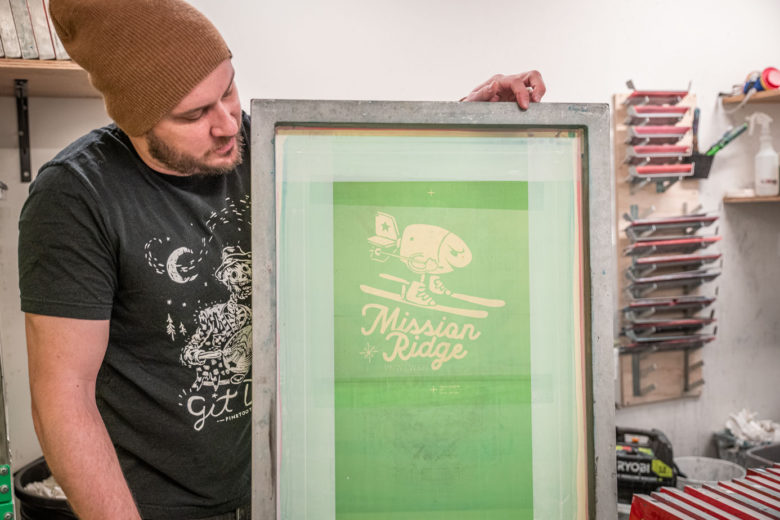 One tee sports a crafty raccoon sweeping litter from a campsite into a dustpan. Another, reminding people to “Take Care Out There,” incorporates the ridgeline of the Sawtooth Mountains. Putnam did a colorful, dynamic image of a skier hurtling down a steep slope, with the sun flaming above the serrated peaks. An elaborate drawing of a skull surrounded by a tangle of vines, branches, and perching birds is Putnam’s riff on D.B. Cooper, the legendary figure who hijacked a plane and disappeared with the ransom money after he parachuted out of the aircraft. But the legend is just a starting point. “In the end, I hope it’s just a potent story with a cool design,” Putnam said. 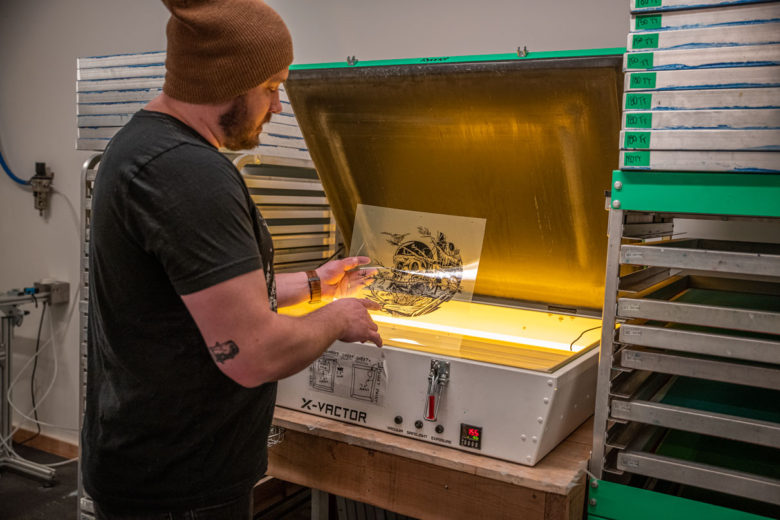 On a typical day at Pinetooth Press, the printing press is spinning, the embroidery machine is whirring, and someone is sewing. “It’s pretty crazy,” Putnam said.

He has five full-time employees and one part-time, working on art and design, printing, embroidery, and sewing. “Everyone who works here has some craftsman DNA – they all make stuff,” he said.

Before buying the high-tech screen printer, Putnam did all the printing by hand, often putting in 12- to 14-hour days. Now, two or three employees load the shirts on the mechanical printer, lining up the colors using a laser beam, and then transfer the printed tees to a drying machine. The printer can produce 10 T-shirts with up to six colors of ink in minutes. The printing process is non-toxic, using water-based inks and biodegradable solvents. 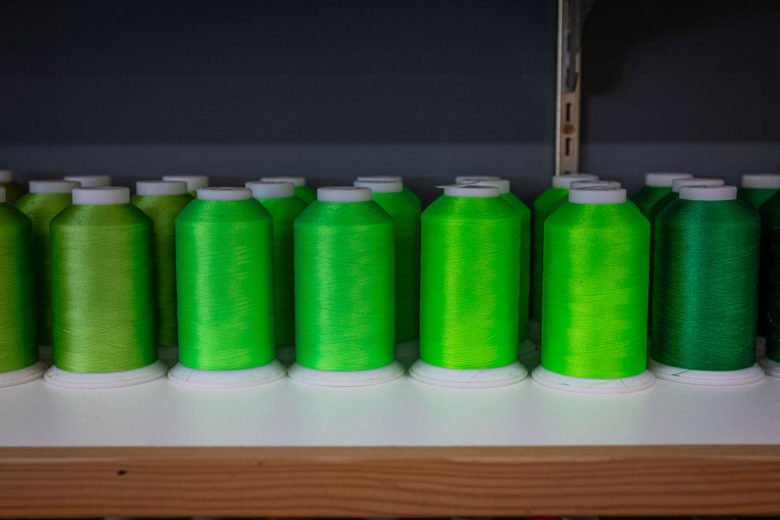 In another alcove in the big, open space, dozens of spools of thread are arrayed in rainbow-colored rows on the computer-driven embroidery machine. And Putnam is still playing with the potential applications of his newest machine, which cuts his designs out of wood, producing decorative screens that are like graphic filigree.

Pinetooth Press is the home for Putnam’s original artwork on T-shirts, sweatshirts, hats, and mugs; as well as tea towels and other goods for the home. He sees it as part of a historic tradition of democratic artwork.

Putnam launched Printmade Apparel to create designs using a client’s brand. Some shirts feature a trendy design with the company name; others incorporate their logo. “The goal is to make exciting products people want to wear, rather than just slapping their logo on it,” he said.

Most of his clients are from North Central Washington, although commissions come from across the country. Bulging files contain film for the hundreds of designs he’s created over the years, for theatrical productions at the Merc Playhouse to the Mission Ridge ski area to the Methow Beaver Project. 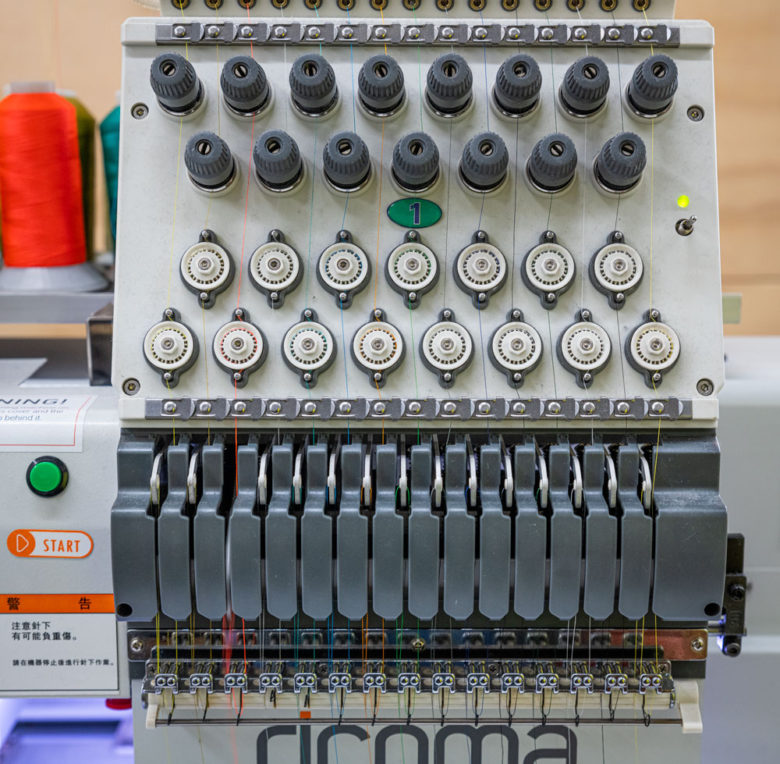 No matter what he does, Putnam is dedicated to creating items with a high level of design – wearable art that will inspire people. “I don’t want things tossed in the garage after a week to wipe up grease,” he said.

Although he’s busy fulfilling the demand for artistic apparel, Putnam still has stories to tell. He’s been nursing a comic-book project for five years, a series of graphic novels – with a Northwest twist – about a hunter who battles mysterious creatures. “He’s kind of a hunter of things he views as dangerously fictitious, like Bigfoot and other fantastic creatures and legends,” Putnam said.

Putnam remains fascinated by these fundamental questions of truth and mythology. It’s a theme he’s explored from many angles – through huge drawings, performance art, and video – but he wants to tell the story through the narrative flow of a graphic novel or comic book. “It’s my baby,” he said. “It’s always going on, but it’s hard to find time.”