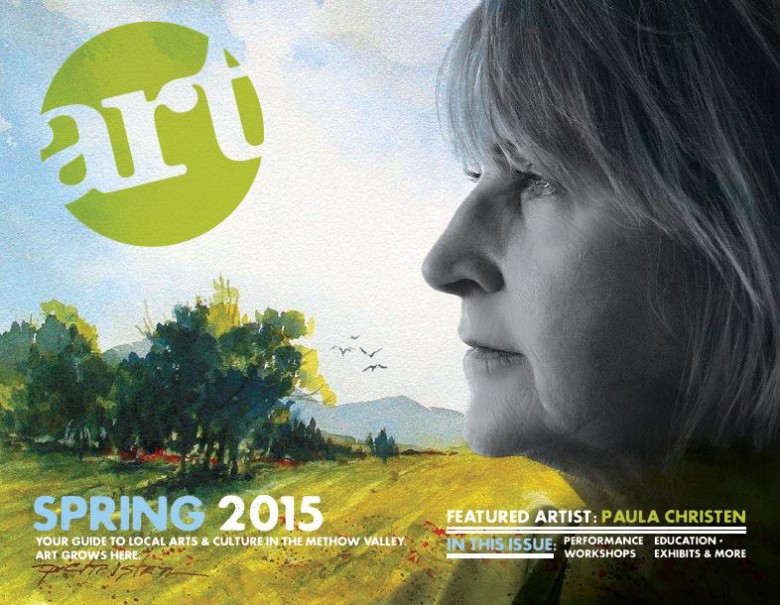 For most artists, at least part of the impulse to create is to say something to the world. But for watercolorist Paula Christen, painting is not a one-way communication, but an opening to a dialogue.

So while Christen incorporates details that welcome the viewer into her paintings, she is careful not to crowd out the viewer’s own associations.

“I don’t want to put in so much that the other person can’t add to it from their imagination,” she said. “It’s like a conversation—each person brings their own experience.”

“Painting is my happy place—where I go to feel better,” she said. “I wouldn’t drag that much of a downer into my painting—it doesn’t belong there.” 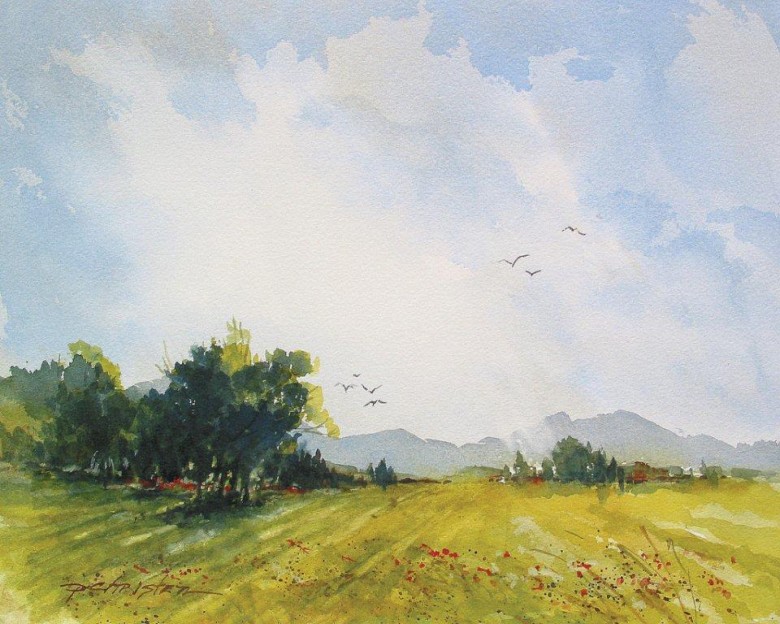 It’s almost as if Christen sees her paintings as animate beings that can hold their own. Before she declares a painting is finished, Christen will put a makeshift frame around it and bring it from her studio into her house. “The painting and I have coffee together, and I consider how much more it needs to say what I had to say.”

But Christen doesn’t want to create the visual equivalent of the person who won’t let anyone else get a word in edgewise. “I’m careful to avoid overkill,” she said. “It’s not every hair on the dog, not another leaf on the tree.”

Christen’s people are similarly imprecise. “My rule is, no face, no fingers, no feet—I just want a human shape,” she said. “I tell my students they’re supposed to be good storytellers and to entertain. They’re not a witness at a murder.”

Although virtually everything Christen paints is rooted in nature, she usually includes a suggestion of the human imprint on the environment, whether it’s a fence line, farm equipment, or even a dog.

Those elements function on more than one level. The viewer can imagine meandering along a path, literally entering the world of the painting. But that path is also a compositional element, guiding the viewer from one focal point to another.

“People like stories,” she said. “They want to own the painting—and they want to own the story.” Christen recalled a woman who was looking at her painting of a farm scene. The woman told her it reminded her of collecting eggs, still warm from the hens, on her grandmother’s farm when she was 6. “Even though there were no chickens in that painting, it pulled that out of her memory and made that connection for her,” said Christen.

While many people think some artists create to exorcise demons or cope with sorrow, these are the emotions Christen does not to express through her art. “Painting is my happy place—where I go to feel better,” she said. “I woul 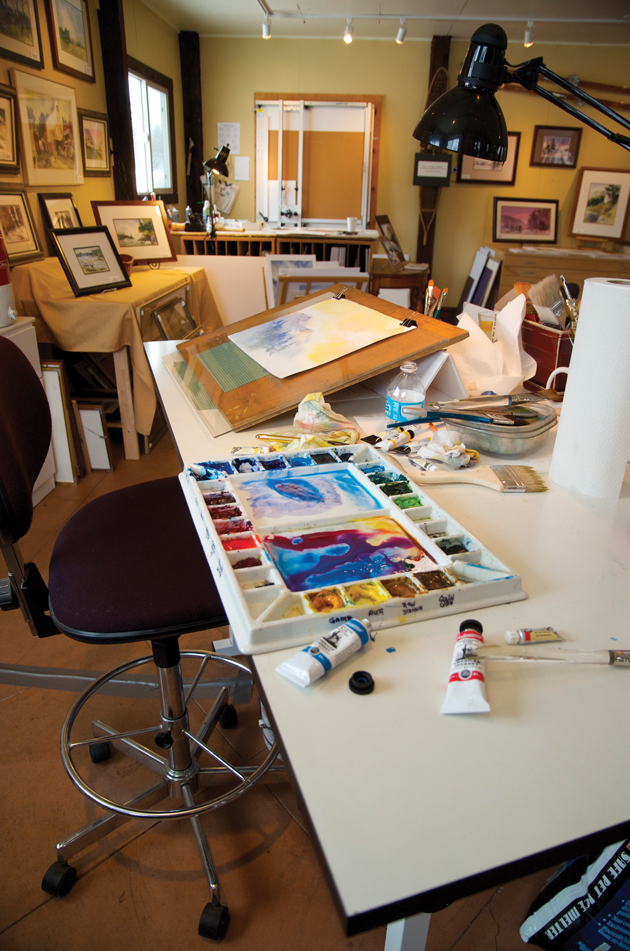 dn’t drag that much of a downer into my painting—it doesn’t belong there.”

Christen also wants her art be a place of relaxation for others. When she paints skiers, for example, she depicts people enjoying being in nature and communicating with each other. “You can’t have a phone to your ear—you have to hold the ski pole,” she said.

Looking around her Winthrop studio, you can imagine accompanying Christen on a tour of familiar and exotic places as the seasons change. There are simple, daily scenes of outdoor cafés, farmers’ markets, haying, and fishing, as well as paintings that transport you to alpine lakes or to a bluff overlooking the Mediterranean. “Wherever I’m at—if I know I have time to look around—I can usually find something to paint,” she said.

Christen has a life-long connection with nature, shaped by childhood of hiking, camping and skiing. She went to high school in Entiat, where there were just 26 students in her graduating class and no art program.

So college was an indulgence, a place to soak up virtually every type of art—from charcoal drawing and ceramics to painting and printmaking. She ended up specializing in oil and acrylic painting. 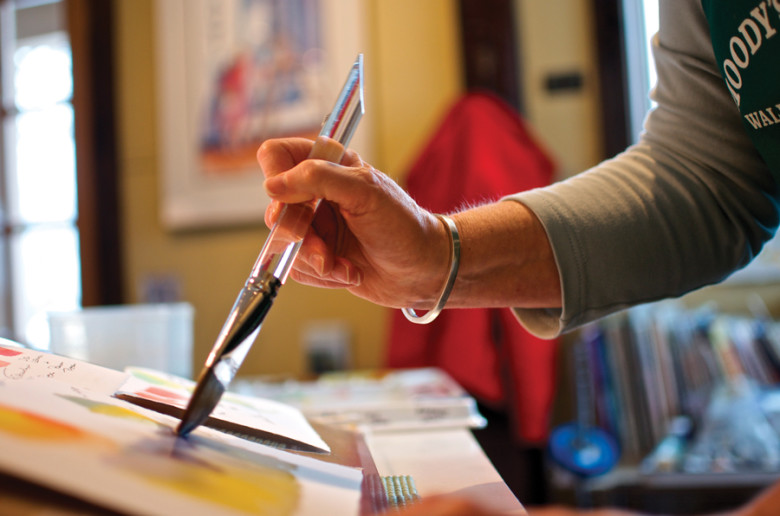 Christen spent four summers during college working in a remote fire lookout in the North Cascades. “That was the best job ever,” she said. “There was incredible beauty—it’s like your own tree house.”

It was also an intensive education in light and weather. “There were the most amazing sunrises and sunsets and storms. I learned real fear and respect for lightning—to be there in the cloud and have it happen,” she said. “From the time you wake up to the time you go to bed, it’s just you and the scenery.”

After college, the demands of making a living turned into a 20-year hiatus from art. She picked art up again when she and a friend ran a screen-printing business and people wanted logos and designs for t-shirts.

She also dabbled in watercolor but, without a good foundation, found it discouraging. Everything changed when she enrolled in a class, where the teacher was laughing and having fun as he painted. Christen realized watercolors didn’t have to be hard.

Since then, Christen has found a way to express in watercolor what she couldn’t in oils or acrylics. Her paintings have an evanescent, translucent quality, but the colors are lush and there are frequent flashes of vibrancy. 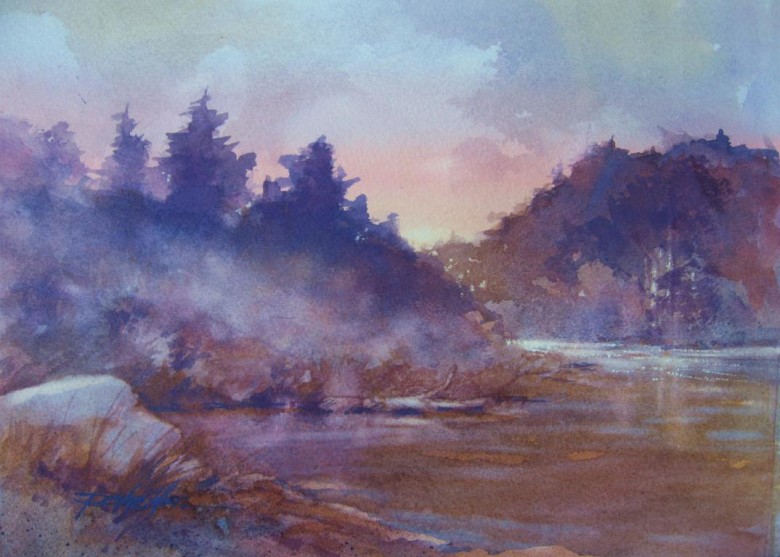 Christen is not afraid to define edges or play with stark contrasts. “The thing that says sun is great shadows—as big as you can make them, as long as you can,” said Christen, pointing to a sun-washed scene on the southern coast of England.

Christen swears by value sketches, quick pencil drawings that help her plan areas of light and dark and determine the focal point and composition. While planning is important in most painting—with the possible exception of abstract expressionism—it is essential with watercolors, where you can’t simply paint over something that didn’t work.

Christen said her students are often intimidated by the value sketch and want to move straight to color.

“Color is fun—the hero,” Christen admits, “but it’s the shapes and values that do the hard work in your painting.”

Christen often uses a simple palette of just three colors, which she mixes to achieve different shades and values. In her studio, she has a chart blending every blue and yellow pigment she had to see how many greens she could make. Among the 56 swatches, you can find the first cottonwood leaves in spring and the deep shadows of pine branches at the end of the day. Her task is finding a way to make all the greens in a landscape interesting, she said.

Christen ordinarily paints on dry paper, but when she wants soft, fuzzy edges and minimal detail, she uses the wet-on-wet technique. That technique served her well for a late-winter scene called Seed Catalog Season, where even the reflected puddles on the muddy road look inviting.

Christen loves to travel and has taken wat 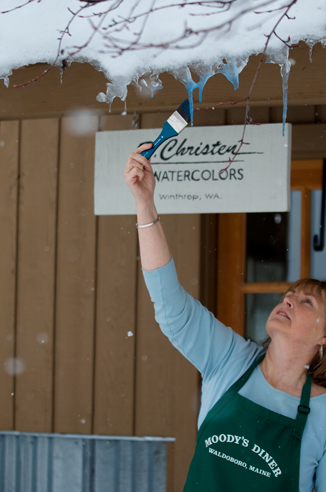 ercolor workshops all over Europe. Even closer to home, she always finds a new perspective on a familiar landscape. “I’ll be thinking, ‘How would I paint that, how would I merge those two colors reflecting off the Columbia?’” she said. “I have to remind myself to drive.”

While some artists feel publicity and marketing divert them from the core of their work, Christen sees her website, blog and newsletter as more ways of telling her story. “I find the whole thing, start to finish, fascinating,” she said. “This is my business—I like the whole spiral—it’s fascinating; it’s mine.”

Christen is fundamentally generous about her art. Even when she makes a presentation about her painting, she wants to know, “How do I make this about them, even though it’s about me? How does this relate to you and the world you live in?”

She also specializes in teaching people who have always wanted to paint but never had the time, or who put their painting aside years ago. In just four hours, her students learn to produce the whole array of colors from three basic pigments and walk out with a finished, framed watercolor. “It’s what I wish somebody had done for me,” she said.

“I want people to know that, no matter when you gave it up, if you have the slightest desire to do whatever brought you that joy, it’s never too late,” she said.

Christen takes profound pleasure in creating something unique. “There will never be another painting like this,” she said. “This is the best I bring to the world. When I’m gone, people will say, ‘She painted. She did this.’”
She allows herself to indulge a little fantasy. “What would the world be like if everybody did what they love? Every job should bring you that much joy.”

Christen has been featured in many local and regional exhibits. Her paintings of ski trails were featured in Cross Country Skier magazine, including her inviting scene of a skier and his dog that was chosen for the cover of the January/February 2014 issue.

WORKSHOPS AND TRAINING: Christen specializes in introducing non artists and beginners to easy watercolor! “It doesn’t matter if you have never painted or haven’t picked up a brush in years,” she says. “You’ll learn fun and simple basic techniques, along with my tips and tricks for a quick start to painting. We’ll paint side by side using the same professional grade materials I do in the paintings I show and sell.” Find out more CLICK HERE