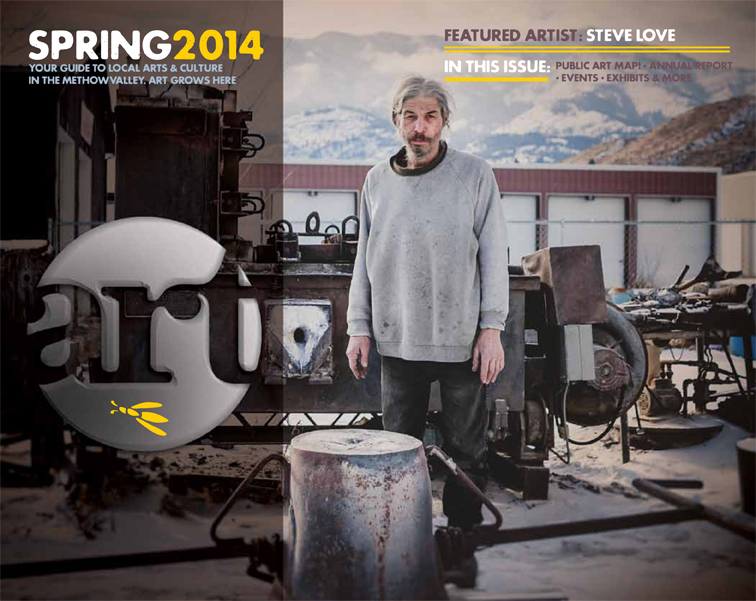 Sculptor Steve Love was putting the finishing touches on his latest public-art commission, a project that involved, among other things, carving with a chainsaw, cutting a swarm of yellow jackets out of bronze, and crawling into the bronze spiral to weld the pieces together.

Love had to work carefully to carve the yellow jackets’ fine legs and antennae before the heat of the plasma cutter melted the bronze. With about 100 insects, it became overwhelming. “A continuum of yellow jackets,” he said. “One just led to another.”

Love’s flared bronze helix is one of four sculptures selected in 2011 for the Twisp Ponds site, located just west of town, by Methow Arts and the Methow Salmon Recovery Foundation. The organizations received 38 submissions to their solicitation for art that would convey the role of watershed restoration in salmon recovery.

Love’s concept zeroed in on the benefit of yellow jackets—generally reviled as aggressive stinging insects—to the salmon’s life cycle and habitat. Making these complex connections is typica 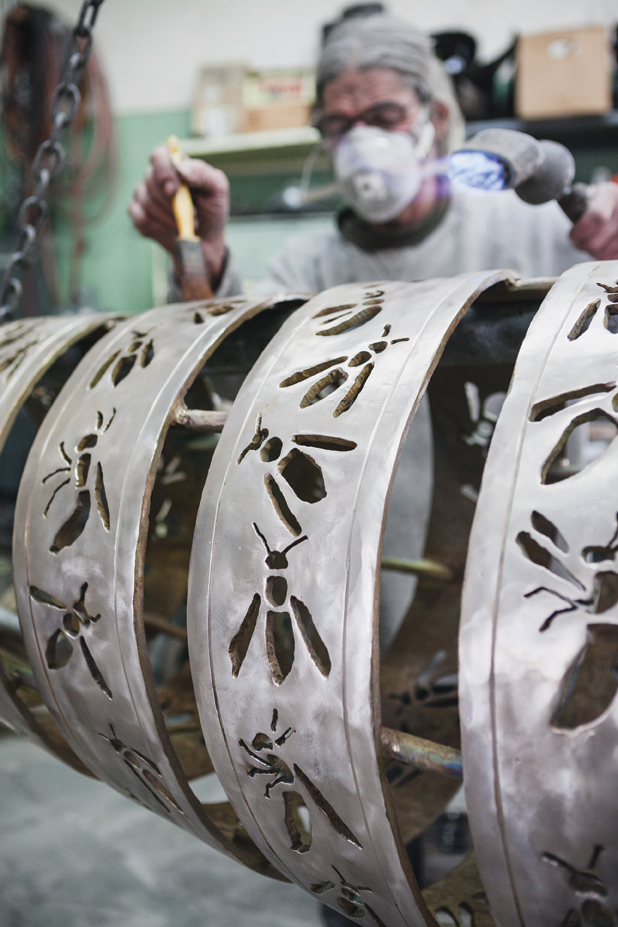 l of Love’s approach. “I try to embody in my art both unity and balance, and opposing parts and forces,” he said about the piece.

“I have heard that Twisp was called that by Native Americans because of the sound of swarms of yellow jackets attracted to the abundance of salmon, which died there after spawning,” Love wrote in his description of the sculpture.

The Twisp spiral rests on a base with a grouping of river rocks and four spring Chinook salmon that Love cast in aluminum, which reflects the shimmering qualities of the fish.

Love has always been involved in art, beginning with drawing as a young boy. He first took up sculpture decades ago, after he became inspired by Eskimo carvings and began doing his own carvings in antler, wood, and stone.

But Love had no interest in metal until he met sculptor Rich Beyer and began working with him at his foundry in Pateros. Love quickly took to the material, finding that working in metal actually allowed him to add more detail to his pieces.

Love has now been coaxing animals, reptiles, and insects—and the occasional human—out of metal for more than two decades at the Beyer Foundry, where he and Beyer worked together for about 10 years. Love and his wife bought the foundry in 2002, and Beyer continued to work there until he moved out of the area a few years before his death in 2012.

It’s hard for someone not skilled in the techniques for working with metal—many adapted from heavy industry—to imagine creating expressive sculptures using chainsaws, forges, and plasma torches. Yet despite the labor-intensive process, heavy machinery, and intense temperatures of the molten metals, Love said he was drawn to metal because it is quick and flexible.

“My carvings in wood and stone were simpler, because I was limited by the material,” said Love. “It’s very difficult to create very thin parts in stone.”

After making a two-dimensional sketch and a quick version in clay, Love carves a full-size model for the casting in Styrofoam or wood. He prefers Styrofoam because it allows him to quickly rough out the basic form with a chainsaw and then add detail with grinders and knives.

“Metal was pretty appealing—I liked how quickly you could work with metal and produce something, and how it lets you explore more ideas,” he said.

It’s also surprisingly forgiving. “If I make a mistake in Styrofoam, I can either start over or glue another piece on,” he said. “And metal is so durable—that’s also appealing.”

On the other hand, Love admitted, “Metal is heavy, dirty work—you need a respirator, ear protection, and protective gear.” The foundry is crammed with hand tools and torches for cutting, bags of sand, and welding implements, and the metal and sand leave a fine dust on most surfaces. Bigger equipment includes a drill press, a band saw, a crucible furnace for melting bronze and aluminum, a forge for bending metal, and a machine for mixing sand.

Outside the foundry, there is a large boom crane and a forklift for pouring vats of molten metal and maneuvering finished sculptures. There is also what at first glance looks like a tidy junkyard, but these piles of donated supplies are an important source of materials and inspiration. Love is currently turning a rusty steel propane tank made in 1948 at the Seattle Boiler Works, into a giant tortoise, with feet made from bent and forged scrap steel and pipe. The lifelike toes are carved from more discards.

Love has always favored animals and mythological beings as subjects. “It’s interesting how universal some mythological themes are,” he said, noting that the image of a snake and woman is found in sources from the bible to Egyptian art, although the symbolism may differ. “The snake is a positive character and a bringer of knowledge in some cultures,” he said.

One of his proposals for the Twisp Ponds built on the Salish legend of Coyote leading the salmon. Another theme that has cropped up in his art is a face with intertwined leaves, a popular motif in Celtic mythology and in European cathedral architecture.

Although Love’s inspirations often come from ancient myths and architecture, his reference material can be decidedly more prosaic. As an angler, Love knows fish, but the model for Twisp actually came from a modern-day supermarket—a salmon head that Love kept in the freezer so he could refer to it as needed. 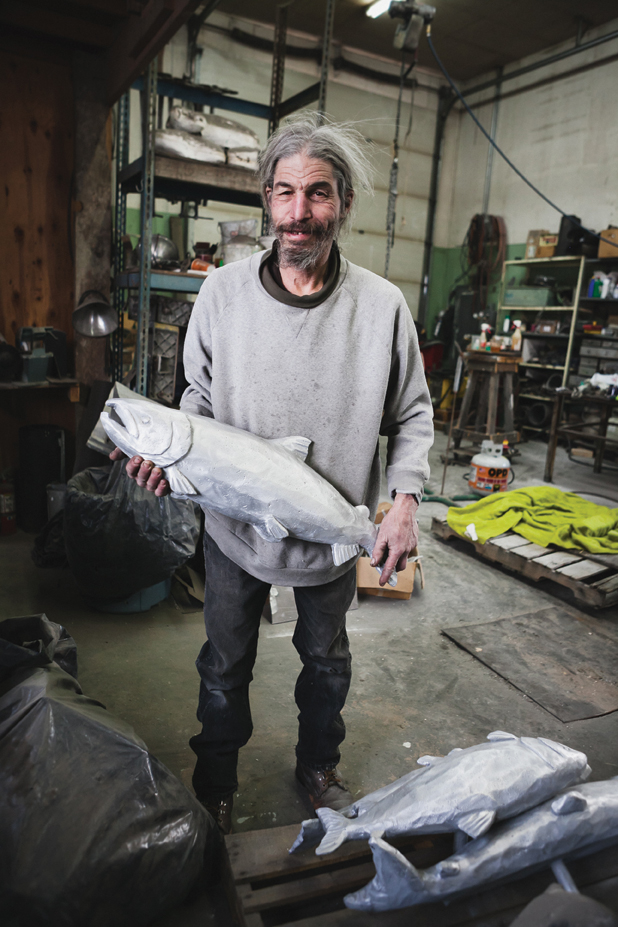 “I try to do things that are funny”… said Love. “That’s part of the function—to make people laugh by doing strange, funny things.”

Love regularly incorporates humor in his art. “I try to do things that are funny,” he said, pointing to his piece called The Contrary, a sculpture of a man sitting backwards on a horse. The concept comes from Plains Indian culture, where people are often depicted walking or riding in reverse. These figures are revered and imbued with healing powers, said Love. “That’s part of the function—to make people laugh by doing strange, funny things.”

“Or a horse rolling on its back—that’s kind of funny, because it’s such an unnatural pose. Horses are usually so dignified and proud, but they change when they’re rolling on the ground,” he said.

In addition to his own work, Love gets commissions for statues and functional pieces such as garden gates and birdbaths. He recently devised a grid of stainless-steel blades to cut granola bars for the Sweet River Bakery, down the street from his foundry in Pateros.

“I like the mix of functional work and sculpture—it’s all art,” he said. “And it helps to have someone else doing part of your thinking. People have really good ideas and a good art sense—I can learn from them.”

Love sees unlimited possibilities in sculpture and, in particular, in public art. “An important part of making something is to have people see it and have it affect people—for better or worse,” he said. “It’s a whole, nonverbal world.” 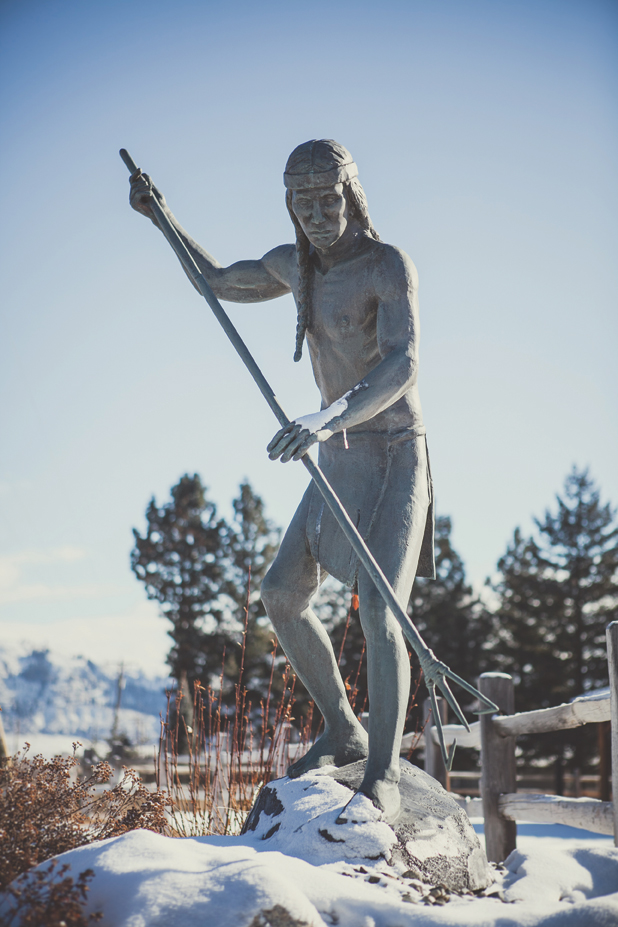 The techniques for casting bronze and aluminum differ slightly, but both involve encasing the Styrofoam or wood model in large crates and packing sand around it to create a mold.

Once the sand hardens, the Styrofoam model is removed and replaced by a temporary layer of clay with the desired thickness of the final metal sculpture. More sand is packed on the other side of the clay. After the clay is removed, molten bronze is poured into the space between the two sand forms.

For aluminum, which melts at a lower temperature—a mere 1200°F, instead of 2100°F for bronze—Love can dispense with the clay and second layer of sand. The molten aluminum is poured into the box, where the heat of the metal burns away the Styrofoam.

After the metal cools and solidifies, Love cleans the sculpture by sandblasting and washing. He also grinds the surface to remove any flaws from the casting and achieve the desired texture.

For more detail and a smoother surface, Love will use the lost-wax process. The centuries-old process uses a model made from clay, stone, or wood to create a reusable flexible mold, which gets coated with a layer of wax. A plaster-and-sand mold is applied to the other side of the wax. Once it hardens, the wax is melted out and molten metal is poured into the mold, filling the space formerly occupied by the wax.

Where to Find his Art

The Twisp Ponds sculpture will be installed this spring at the Methow Salmon Recovery Foundation site just west of town, but in the meantime people can see other examples of Love’s public art in the Methow Valley and throughout the region.

Love and Beyer worked together on the sculpture of the cowboy dragging his saddle that sits outside in Winthrop Dry Goods and Storage (Love made the saddle). Love also sculpted the Methow spear fisher that greets people outside the Twisp self-storage units.

In Wenatchee, Love’s monumental bronze praying mantis presides over a native-plant garden at Wenatchee Valley College and a cougar perches on a piece of granite in an outdoor courtyard at Wenatchee High School.

Love’s ornamental ironwork can be seen in an arbor currently on display outside the Chelan City Hall, part of a rotating exhibit of public art.