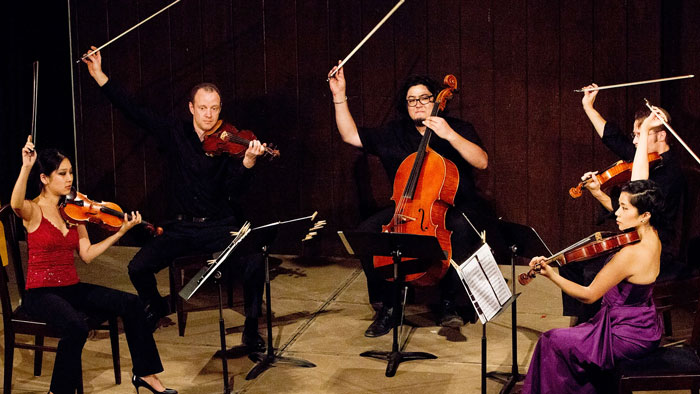 There’ll be a pianist and a clarinetist, both prize-winning virtuosos; one of the world’s most acclaimed string quartets; a mezzo-soprano; three percussionists; and 12 bulb horns – in just five concerts. The Methow Valley Chamber Music Festival, known for mixing unusual performers with classic repertoire and exciting new works, is living up to its reputation in its 23rd-annual season.

This will also be the first time the festival has programmed a Bartók string quartet, a specialty of the renowned New York City­–based Aizuri Quartet that makes its festival debut this summer. Krentz called Bartók’s quartets among the greatest masterworks of the 20th century.

The concerts will feature music from the baroque era – a concerto for four violins by Vivaldi – through the contemporary era, with well-loved chamber works by Mozart, Beethoven, Brahms, and Schubert, as well as less-familiar fare.

Krentz has programmed two recent prize-winners – Kenny Broberg, the silver medalist from the Van Cliburn International Piano Competition, and Narek Arutyunian, a dynamic, up-and-coming clarinetist who won the auditions held by the Young Concert Artists International. Both perform extensively as soloists and are excited to have the opportunity to play chamber music, said Krentz.

Broberg, who impressed the Van Cliburn judges with performances that showed “an imaginative shaping of themes… and an unfailing sense of momentum,” will be featured in works by Schubert, Brahms and Dvorák. Arutyunian will be highlighted in a clarinet quintet by Mozart and a trio by Brahms.

Krentz is pleased to bring back mezzo-soprano Deanne Meek, who sang at the festival several years ago. Last year’s concerts featured a tenor, and adding vocal artists lends a special quality to the festival, said Krentz. “It was so glorious to have that voice in the barn,” he said.

The first Saturday concert showcases a trio of percussionists on marimba, bass drum, and trap set, plus gently amplified cello, in a composition by steel-drum virtuoso Andy Akiho. “It’s a very cool piece – modern but very, very hip. It blends two of my favorite, most beautiful sounds,” said Krentz. “The music just washes around and is gorgeous.”

The percussionists will perform a unique arrangement for violin, cello, piano, and percussion of a Shostakovich symphony. The bulb horns are part of a witty and earthy piece by 20th-century Hungarian composer Gyorgy Ligeti called “Le Grand Macabre.”

The festival runs from July 26 to Aug 4, with five Centerstage concerts at Signal Hill Ranch between Winthrop and Twisp. In addition, there are casual performances around the valley, free open rehearsals, and even star-gazing and a chance to meet the musicians.